Friday, May 24, 2019 at Alice Tully Hall and Broadcast at juilliard.edu/live

NEW YORK –– The Juilliard School today announced that choreographer Alonzo King, actress Rita Moreno, and composer Kaija Saariaho will receive honorary doctorates during the school’s 114th commencement ceremony, which takes place Friday, May 24, 2019, at 11am in Alice Tully Hall and will be live-streamed at juilliard.edu/live.

Damian Woetzel will give his first commencement address since becoming Juilliard’s seventh president, in July 2018. Juilliard alumna and soprano Camille Zamora will deliver the commencement address. Zamora is the co-founder and co-executive director of Sing for Hope, a nonprofit organization dedicated to transforming lives through creativity.

Biographies of the Honorary Degree Recipients

Alonzo King, who has been called a visionary choreographer, is altering the way we look and think about movement. King calls his works “thought structures,” created by the manipulation of energies that exist in matter through laws, that govern the shapes and movement directions of everything that exists. Named as a choreographer with “astonishing originality,” Alonzo King has guided LINES Ballet by his unique artistic vision since 1982.

King has works in the repertories of the Royal Swedish Ballet, Frankfurt Ballet, Ballet Bejart, Les Ballets de Monte-Carlo, Alvin Ailey, Hong Kong Ballet, San Francisco Ballet, Hubbard Street, and many others. He has collaborated with distinguished visual artists, musicians, and composers across the globe. His work has been recognized for its impact on the cultural fabric of the company’s home in San Francisco as well as internationally by the dance world’s most prestigious institutions. Named a master of choreography by the Kennedy Center in 2005, King has been the recipient of the NEA choreographer’s fellowship, the Jacob’s Pillow creativity award, the U.S. Artist Award in Dance, a N.Y. Bessie Award, and the National Dance Project’s residency and touring awards. In 2015 he received the Doris Duke Artist Award in recognition of his ongoing contributions to the advancement of contemporary dance. Joining other icons in the field, King was named one of America’s “irreplaceable dance treasures” by the Dance Heritage Coalition. A former San Francisco commissioner and a writer and lecturer on humanity and art, he holds honorary doctorates from Dominican University of California and California Institute of the Arts.

Rita Moreno has won all four of the most prestigious awards in show business: an Oscar, a Tony, a Grammy, and two Emmys. Her many credits span more than six decades, beginning with her Broadway debut at age 13. Moreno has starred on Broadway and in London's West End; appeared in more than 40 feature films and countless television shows; and has performed at numerous regional theaters, including her one-woman show, Life Without Makeup, at Berkeley Rep.

For three seasons, Moreno starred in the widely popular Latino remake of Norman Lear’s classic sitcom One Day at a Time on Netflix. Recently, she signed on to be an executive producer of the Steven Spielberg remake of West Side Story, a film in which she is also co-starring. When not shooting a TV show or film, Moreno lectures and performs as a guest artist with symphony orchestras across the country.

Moreno received the Kennedy Center Honor for her lifetime contributions to American culture and was honored by her peers as the 50th recipient of the Screen Actors Guild Life Achievement Award. Prior to that, she served as the grand marshal of the National Puerto Rican Day Parade. In 2013, she released her first ever all-Spanish language album, Una Vez Más, produced by her good friend Emilio Estefan. She also added being a New York Times bestselling author to her list of accomplishments with her first book, Rita Moreno: A Memoir, published by Celebra Books.

Kaija Saariaho is a prominent member of a group of Finnish composers and performers who are making a worldwide impact. She studied composition in Helsinki, Freiburg, and Paris, where she has lived since 1982. Her studies and research at IRCAM have had a major influence on her music and her characteristically luxuriant and mysterious textures are often created by combining live music and electronics. Although much of her catalogue comprises chamber works, from the mid-'90s she has turned increasingly to larger forces and broader structures, such as the operas L’Amour de Loin and Adriana Mater and the oratorio La Passion de Simone. Saariaho has claimed the major composing awards in the Grawemeyer Award, Wihuri Prize, Nemmers Prize, Sonning Prize, and Polar Music Prize. In 2018 she received the BBVA Foundation’s Frontiers of Knowledge Award. In 2015 she was the judge of the Toru Takemitsu Composition Award. Always keen on strong educational programs, Saariaho was the music mentor of the 2014-15 Rolex Mentor and Protégé Arts Initiative and was in residence at U.C. Berkeley Music Department in 2015. Saariaho continues to collaborate for the stage. Only The Sound Remains, her most recent opera collaboration with Peter Sellars, opened in Holland in 2016. In the same year her first opera, L'Amour de Loin, was presented in its New York premiere by the Metropolitan Opera in a new production by Robert Le Page. The Park Avenue Armory and New York Philharmonic presented a celebration of her orchestral music with visual accompaniment in October 2016. February 2017 saw Paris come alive with her work when she was featured composer for the Festival Presences. Her fifth opera, Innocence, will premiere in summer 2020.

Soprano Camille Zamora (MM ’02, voice, Artist Diploma ’04, opera studies) has collaborated with artists ranging from Plácido Domingo to Sting, garnering acclaim for her interpretations of repertoire from Mozart to tango.

Zamora’s recent seasons have featured performances with Yo-Yo Ma (Pre-College ’71; Professional Studies ’72, cello) at the U.S. Capitol, her Kennedy Center recital debut, and seven new operatic roles, including the principal soprano in Hindemith’s The Long Christmas Dinner with the American Symphony Orchestra at Lincoln Center, the live recording of which topped The New York Times Classical Playlist. She has performed Mozart heroines with the Boston Lyric, Anchorage, Glimmerglass, and Virginia opera companies, and Bach with the Orchestra of St. Luke’s, London Symphony Orchestra, and Guadalajara Symphony. Her recitals have been broadcast on NPR, BBC Radio, Deutsche Radio, and Sirius XM. Other recent highlights include music of Granados with Cristina Pato and Yo-Yo Ma in the award-winning documentary The Music of Strangers; American Songbook classics by Gershwin, Berlin, Ager, and Arlen with The Late Show With Stephen Colbert bandleader Jon Batiste (BM ’08, MM ’11, jazz); and Twin Spirits: Robert and Clara Schumann at Lincoln Center and L.A.’s Music Center in collaboration with Joshua Bell, Jeremy Denk (DMA ’01, piano), Nathan Gunn, Trudie Styler, and Sting.

Hailed as a leading interpreter of classical Spanish song by NBC Latino and the Congressional Hispanic Caucus, Zamora has performed and recorded principal roles in the zarzuelas La Verbena de la Paloma, La Revoltosa, and La Tabernera del Puerto. Her symphonic concerts of classic Spanish songs, Tango Caliente and Sueños de España, are heard this season with the Dallas, Edmonton, Milwaukee, and Florida symphonies and the Rochester Philharmonic. The 2019-20 season will see the launch of her new symphonic pops concert, Havana Nights, in collaboration with the Mambo Kings.

A Kennedy Center Citizen Artist, NY1 New Yorker of the Week, and one of CNN’s Most Intriguing People, Zamora co-founded the arts nonprofit Sing for Hope with Monica Yunus (BM ’00, MM ’02, voice).

About Damian Woetzel, President of The Juilliard School

Damian Woetzel is the seventh president of The Juilliard School. Since retiring in 2008 from a 20-year career as a principal dancer with New York City Ballet, Woetzel has taken on multiple roles in arts leadership, including artistic director of the Vail Dance Festival since 2007, and director of the Aspen Institute Arts Program (2011-18). As an independent director, choreographer, and producer, his recent projects include DEMO at the Kennedy Center; Spaces by Wynton Marsalis for Jazz at Lincoln Center; Kennedy Center Honors tributes to Natalia Makarova, Patricia McBride, and Carmen de Lavallade; an arts salute to Stephen Hawking for the World Science Festival; two Turnaround Arts performances at the White House and the first performance of the White House Dance Series, all hosted by Michelle Obama. Woetzel has collaborated on numerous performances and initiatives with Yo-Yo Ma, including the Silk Road Connect program in the New York City public schools. In 2009, Woetzel became the founding director of the Jerome Robbins Foundation’s New Essential Works (NEW) Program, a five-year program that initiated grants to support the production of 35 new dance works. In 2009, President Obama appointed Woetzel to the President’s Committee on the Arts and Humanities, and he served throughout the Obama administration. Woetzel holds a Master in Public Administration degree from Harvard’s Kennedy School of Government and has been a visiting lecturer at Harvard Law School. He received the Harvard Arts Medal in 2015, and is a member of the American Academy of Arts and Sciences.

Located at Lincoln Center in New York City, Juilliard offers undergraduate and graduate degrees in dance, drama (acting and playwriting), and music (classical, jazz, historical performance, and vocal arts). Currently more than 800 artists from 42 states and 45 countries are enrolled at Juilliard, where they appear in over 700 annual performances in the school’s five theaters; at Lincoln Center’s Alice Tully and David Geffen Halls and at Carnegie Hall; as well as other venues around New York City, the country, and the world. 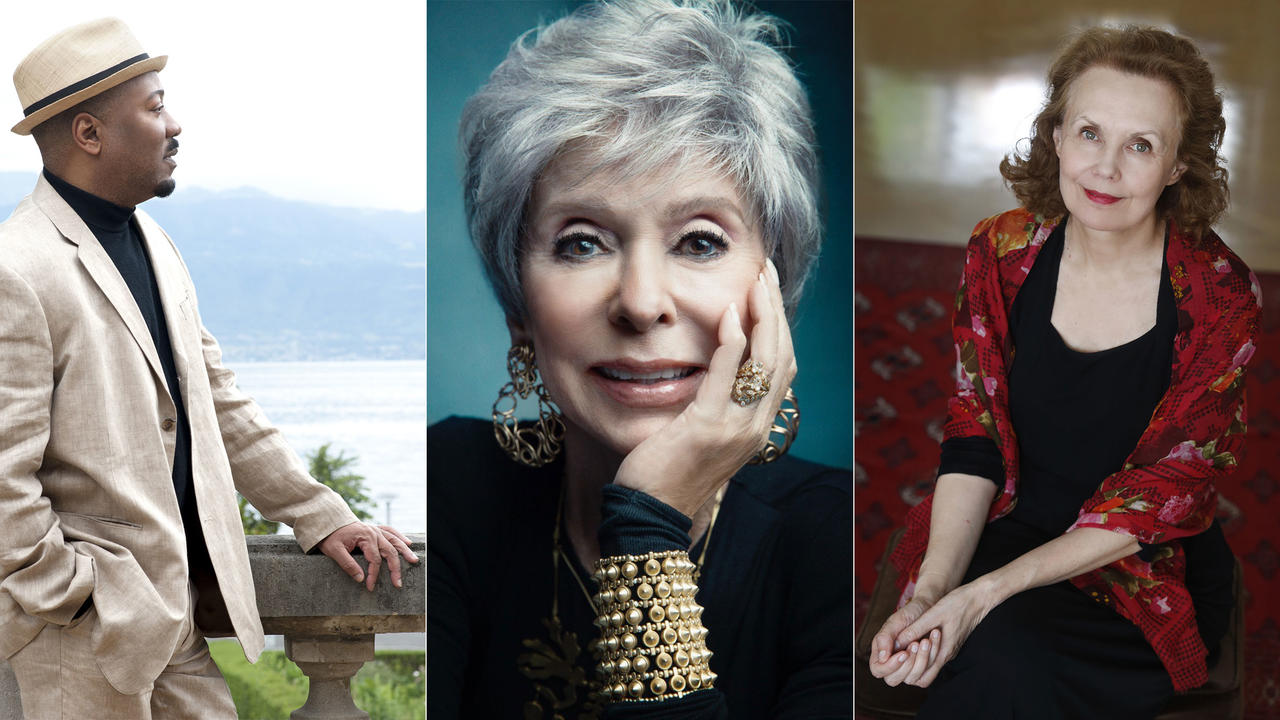