NEW YORK –– Juilliard Dance, under the direction of Alicia Graf Mack, announces its 2019-20 season of performances of world premieres, masterworks in repertory, and new works developed by Juilliard students. Graf Mack, a former leading dancer of Alvin Ailey American Dance Theater and former principal dancer with Dance Theatre of Harlem and Complexions Contemporary Ballet, enters her second season as director of the division.

Tickets for New Dances and Juilliard Spring Dances are $30 ($15 for full-time students with a valid ID) and will be available September 19, 2019, at juilliard.edu/calendar.

A sampling of works curated from workshops and performances by Juilliard Dance Division students throughout the year. Tickets at $10 are required and will be available beginning September 19, 2019 at juilliard.edu/calendar.

Juilliard Dance’s class of 2020 presents a diverse program of existing repertory and new works created by commissioned choreographers. Tickets at $20 are required and will be available beginning September 19, 2019, at juilliard.edu/calendar.

New Dances: Edition 2019 Choreographers
Huntsville, Alabama native Amy Hall Garner (BFA ’99) is an internationally known choreographer based in New York City who creates works in the ballet, modern, and theatrical genres. Her work has been commissioned by numerous schools and companies including Juilliard, Ailey II, Collage Dance Collective, the Ailey School, Barnard College, the University of the Arts, and Central Pennsylvania Youth Ballet. She has created works for Columbia Ballet Collaborative, and personally coached Grammy Award winner Beyoncé, providing additional choreography for The Mrs. Carter Show World Tour. Her theatrical choreography credits include The Color Purple for the Milwaukee Repertory Theater, and she served as the associate choreographer for the Off-Broadway musical Invisible Thread, directed by Tony winner Diane Paulus. In 2018, she participated in Alvin Ailey’s New Directions Choreography Lab supported by the Ford Foundation. Garner was one of the first recipients of the Joffrey Ballet’s Choreography of Color award (now titled Winning Works). She has taught at the American Ballet Theatre and Joffrey Ballet School summer intensives along with having had numerous residencies and master classes across the country. Garner is an adjunct professor at New York University’s New Studio on Broadway at Tisch School of the Arts.

A native of Miami, Jamar Roberts graduated from the New World School of the Arts. He trained at the Dance Empire of Miami, where he continues to teach, and as a fellowship student at the Ailey School. Roberts was a member of Ailey II and Complexions Contemporary Ballet. Dance magazine featured Roberts as one of “25 to Watch” in 2007and on the cover in 2013. He performed at the White House in 2010, and as a guest star on So You Think You Can Dance, Dancing with the Stars, and The Ellen DeGeneres Show. In 2015, he made his Ailey II choreographic debut with his work Gemeos, set to the music of Afrobeat star Fela Kuti. His first work for the company, Members Don’t Get Weary, premiered during the 2017 New York City Center season. Roberts won outstanding performer at the New York dance and performance “Bessie” awards and was a guest star with London’s Royal Ballet. He joined Alvin Ailey American Dance Theater in 2002.

Andrea Miller (BFA ’04), founder and artistic director of the Brooklyn-based company, Gallim, has established herself as a groundbreaking artist, relentlessly in search of the deeper meaning of physical movement within the human experience. A sought-after creator and collaborator in art, film, theater, tech and fashion, in 2017-18 Miller became the first choreographer to be named artist in residence at the Metropolitan Museum of Art. She is also a Guggenheim Fellow and in 2018 she was featured in Forbes magazine as a female entrepreneur and leader in the dance world. Her acclaimed works and commissions are performed by Gallim and other companies worldwide, including at The MET, Lincoln Center, the Kennedy Center, the Joyce, Jacob’s Pillow, New York City Center, BAM, Spoleto USA, Theatre National de Chaillot, Frieze Festival, Art Basel, Grec Barcelona and Theaterhaus Stuttgart. Recent commissions include Pennsylvania Ballet, Rambert 2, Ailey 2, Abraham.in.Motion, NDT 2, Bern Ballet, Atlanta Ballet, Grace Farms, Peak Performances and Kimmel Center. Collaborations in fashion include Hermès, Vogue, Lacoste, Calvin Klein, Lane Crawford, K-Swiss, and Zach Gold. Film credits include The Death and Life of John F. Donovan (2018), directed by Xavier Dolan, and In This Life (2018) starring Robbie Fairchild. Other honors include: Sadler’s Wells Jerwood Fellowships and Princess Grace Foundation Fellowship. Miller’s educational programming is run from Gallim’s Brooklyn home studio and has been brought to universities and educational centers across the U.S., including Juilliard, Harvard, Barnard, NYU, Marymount College, and Wesleyan.

For 35 years, Stephen Petronio has honed a unique language of movement that speaks to the intuitive and complex possibilities of the body informed by its shifting cultural context. He has collaborated with a wide range of artists in many disciplines over his career and holds the integration of multiple forms as fundamental to his creative drive and vision. He continues to create a haven for dancers with a keen interest in the history of contemporary movement and an appetite for the unknown. Petronio was born in Newark and received a BA from Hampshire College in Amherst, Massachusetts, where he began his early training in improvisation and dance technique. He was greatly influenced by working with Steve Paxton and was the first male dancer of the Trisha Brown Dance Company (1979 to 1986). He has received accolades, including a John Simon Guggenheim Fellowship, awards from the Foundation for Contemporary Performance Arts and New York Foundation for the Arts, an American Choreographer award, a New York Dance and Performance “Bessie” award, and a 2015 Doris Duke Performing Artist award. Petronio has created more than 35 works for his company and has been commissioned by companies, including William Forsythe’s Ballet Frankfurt (1987), Deutsche Oper Berlin (1992), Lyon Opera Ballet (1994), Maggio Danza Florence (1996), Sydney Dance Company (2003, full evening), Norrdans (2006), Washington Ballet (2007), Scottish Ballet (2007), and two works for National Dance Company Wales (2010 and 2013). His company repertory works have been performed by Scottish Ballet, Norrdans in Sweden, Dance Works Rotterdam, National Dance Company Wales, X Factor Dance Company in Edinburgh, Ballet National de Marseille, Ballet de Lorraine, and London Contemporary Dance Theater as well as at universities and colleges throughout the U.S.

Juilliard Spring Dances
Trisha Brown’s Set and Reset/Reset is performed to Laurie Anderson’s Long Time No See. Set and Reset/Reset offers student dancers comprehensive training in the movement aesthetic, choreographic process, and performance fundamentals of post-modern choreographer Trisha Brown. The work is created with the students and design collaborators using the material and ideas from the original; Juilliard will have its own version of the piece. Set and Reset had its world premiere at the Festival d’Avignon in La Chartreuse, France, in 1983; the New York premiere took place at the Next Wave Festival at the BAM Opera House in 1983.

Former Juilliard faculty member Donald McKayle’s Rainbow 'Round My Shoulder is acclaimed as a modern dance classic. A searing dramatic narrative, it is set on a chain gang in the American south where prisoners work, breaking rock from ‘can see to can’t see.’ Their aspirations for freedom come in the guise of a woman, first as a vision, then as a remembered sweetheart, mother, and wife. The songs that accompany their arduous labor are rich in polyphony and tell a bitter, sardonic, and tragic story. The work was created for the Donald McKayle Dance Company and has been performed by Alvin Ailey Dance Theater, Batsheva Dance Company, and Dayton Contemporary Dance, among others. The music will be performed live by the Tony winning Broadway Inspirational Voices choir.

Juilliard alumnus Paul Taylor’s Promethean Fire is set to three keyboard works by J.S. Bach orchestrated by Leopold Stokowski. The music will be performed live by the Juilliard Orchestra. Promethean Fire examines a kaleidoscope of emotional colors in the human condition. The 16 dancers weave in and out of intricate patterns that mirror the way varied emotions weave themselves through life. A central duet depicts conflict and resolution following a cataclysmic event. But if destruction has been at the root of this dance, renewal of the spirit is its overriding message.

About Alicia Graf Mack, Director of Juilliard Dance
Alicia Graf Mack enjoyed a distinguished career as a leading dancer of Alvin Ailey American Dance Theater. She has also been a principal dancer with Dance Theatre of Harlem and Complexions Contemporary Ballet, and she has danced as a guest performer with Alonzo King’s LINES Ballet, Beyoncé, John Legend, Andre 3000, and Alicia Keys. Graf Mack graduated magna cum laude with honors in history from Columbia University and holds an MA in nonprofit management from Washington University in St. Louis. In 2007, Smithsonian magazine named her an American Innovator of the Arts and Sciences. She is a recipient of the Columbia University Medal of Excellence, an award given each year to an alumnus who has demonstrated excellence in their field of work. In 2008, she delivered the keynote address to the graduates of Columbia University’s School of General Studies. As a dance educator, Graf Mack most recently taught as an adjunct faculty member at the University of Houston and was a visiting assistant professor at Webster University. She is a co-founder of D(n)A Arts Collective, an initiative created to enrich the lives of young dancers through master classes and intensives. She began her inaugural season as director of the Juilliard Dance Division in fall 2018.

About Juilliard’s Dance Division
Juilliard Dance aims to create true contemporary dancers—trained in ballet, modern, and contemporary dance forms. Established in 1951 by William Schuman during his tenure as president of Juilliard, with the guidance of founding division director Martha Hill, Juilliard became the first major teaching institution to combine equal instruction in both contemporary and ballet techniques. 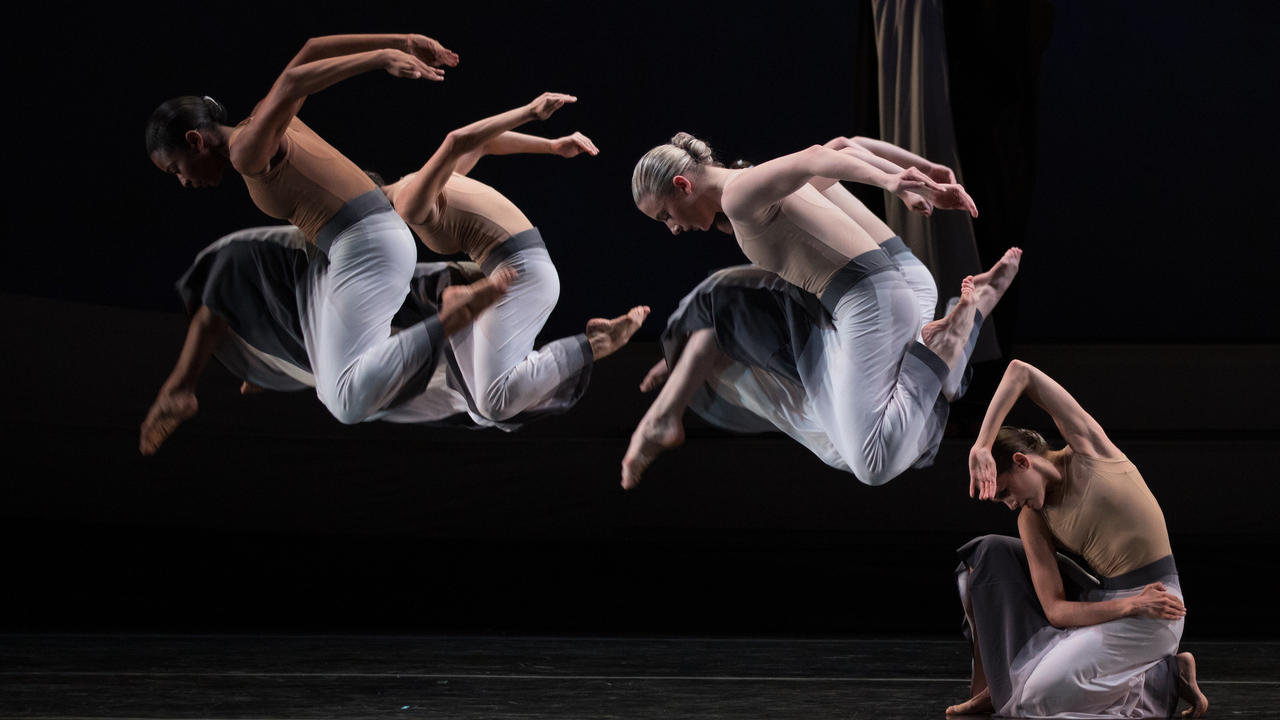