The 2020 Focus Festival Is Trailblazers: Pioneering Women Composers of the 20th Century

The New Juilliard Ensemble (NJE), led by founder and director Joel Sachs and now in its 27th season, celebrates the diversity of today’s music, focusing primarily on repertory of the last decade and presenting international composers who write in the most varied styles. In the 2019-20 season, Sachs and the ensemble will present premieres in three free concerts and open Juilliard’s 36th annual Focus festival, Trailblazers: Pioneering Women Composers of the 20th Century.

Juilliard’s 2020 Focus festival, Trailblazers: Pioneering Women Composers of the 20th Century, takes place from Friday, January 24 to Friday, January 31, 2020. The festival, co-curated by Odaline de la Martinez and Sachs, commemorates the women’s suffrage centennial and celebrates groundbreaking female composers who chose composition as a profession. There will be special tributes to Sofia Gubaidulina, Thea Musgrave, Betsy Jolas, and Jacqueline Fontyn, four women born in the 1920s and ’30s who are still actively composing.

Grażyna BACEWICZ Cello Concerto No. 2 (1963) (soloist to be announced)

Sofia GUBAIDULINA The Rider on the White Horse (2002, New York premiere) (organ soloist to be announced)

Tickets for New Juilliard Ensemble and AXIOM concerts are free and will be available beginning September 19, 2019, at juilliard.edu/calendar.

The New Juilliard Ensemble, led by founding director Joel Sachs and in its 27th season, presents music by a variety of international composers who write in diverse styles. The ensemble appears regularly at MoMA’s Summergarden, has been featured four times at the Lincoln Center Festival, and has premiered some 100 compositions.

The New Juilliard Ensemble performs in Juilliard’s Focus festival; recent Focus festivals have included: On the Air!: A Salute to 75 Years of International Radio Commissioning (2019), China Today: A Festival of Chinese Composition (2018); Our Southern Neighbors: The Music of Latin America (2017); Milton Babbitt’s World: A Centennial Celebration (2016); and Nippon Gendai Ongaku: Japanese Music Since 1945 (2015).

Joel Sachs, founder and director of the New Juilliard Ensemble, performs a vast range of traditional and contemporary music as a conductor and pianist. As co-director of the internationally acclaimed new music ensemble Continuum, he has appeared in hundreds of performances in New York, nationally, and throughout Europe, Asia, and Latin America. He has also conducted orchestras and ensembles in Austria, Brazil, Canada, China, El Salvador, Germany, Iceland, Mexico, Switzerland, and Ukraine, and has held new music residencies in Berlin, Shanghai, London, Salzburg, Curitiba (Brazil), Newcastle Upon Tyne (U.K.), Helsinki, and the Banff Centre (Canada).

A graduate of Harvard, Sachs received his PhD from Columbia University. In 2011, he was made an honorary member of Phi Beta Kappa at Harvard University for his work in support of new music, and received the National Gloria Artis Medal of the Polish Government for his service to Polish music. In 2002, he was given Columbia University’s Alice M. Ditson Award for his service to American music.

AXIOM, led by music director Jeffrey Milarsky, is dedicated to performing the masterworks of the 20th- and 21st-century repertoire. Since its debut in Avery Fisher Hall (now David Geffen Hall) in 2006, the student-created group has established itself as a leading ensemble in New York City’s contemporary music scene with performances throughout Lincoln Center, in addition to appearances at Columbia University’s Miller Theatre and (Le) Poisson Rouge in Greenwich Village.

AXIOM is grounded in Juilliard’s curriculum. Students receive a credit in chamber music for performing in the ensemble, and during any four-year period, AXIOM members will have the opportunity to perform works by Adams, Birtwistle, Druckman, Lindberg, and Schoenberg, among other composers. Guest conductors of AXIOM have included Alan Gilbert, Susanna Mälkki, and David Robertson.

In the 2016-17 season, AXIOM performed programs honoring composer John Adams on his 70th birthday, Steve Reich on his 80th birthday, and a program devoted to the music of Kaija Saariaho.

American conductor Jeffrey Milarsky is the founding music director of AXIOM. Known for his innovative programming, he has been hailed for his interpretation of a wide range of repertoire, which spans from Bach to Xenakis. In recent seasons he has worked with such orchestras as the New York Philharmonic, San Francisco Symphony, Los Angeles Philharmonic, Milwaukee Symphony, American Composers Orchestra, MET Chamber Ensemble, Bergen Philharmonic, Chamber Music Society of Lincoln Center, New World Symphony, and the Tanglewood Festival Orchestra. In the U.S. and abroad, he has premiered and recorded works by many groundbreaking contemporary composers in venues such as Carnegie Hall, Zankel Hall, Davies Symphony Hall, Alice Tully Hall, Walt Disney Concert Hall, Boston’s Symphony Hall, and IRCAM in Paris.

Milarsky has a long history of premiering, recording, and performing American composers and in keeping with that, in 2013 was presented with the prestigious Ditson Conductor’s Award. His interest and dedication has brought forth collaborations with esteemed composers such as Adams, Babbitt, Cage, Carter, Corigliano, Crumb, Davidovsky, Druckman, Gordon, Lang, Mackey, Rouse, Shapey, Subotnick, Wuorinen, and an entire generation of emerging composers.

An in-demand timpanist and percussionist, Milarsky has been the principal timpanist for the Santa Fe Opera since 2005. In addition, he has performed and recorded with the New York Philharmonic, Philadelphia Orchestra, and Pittsburgh Symphony. He has recorded extensively for Angel, Bridge, Teldec, Telarc, New World, CRI, MusicMasters, EMI, Koch, and London records.

Milarsky received his bachelor’s and master’s degrees at Juilliard, where he was awarded the Peter Mennin Prize for outstanding leadership and achievement in the arts. 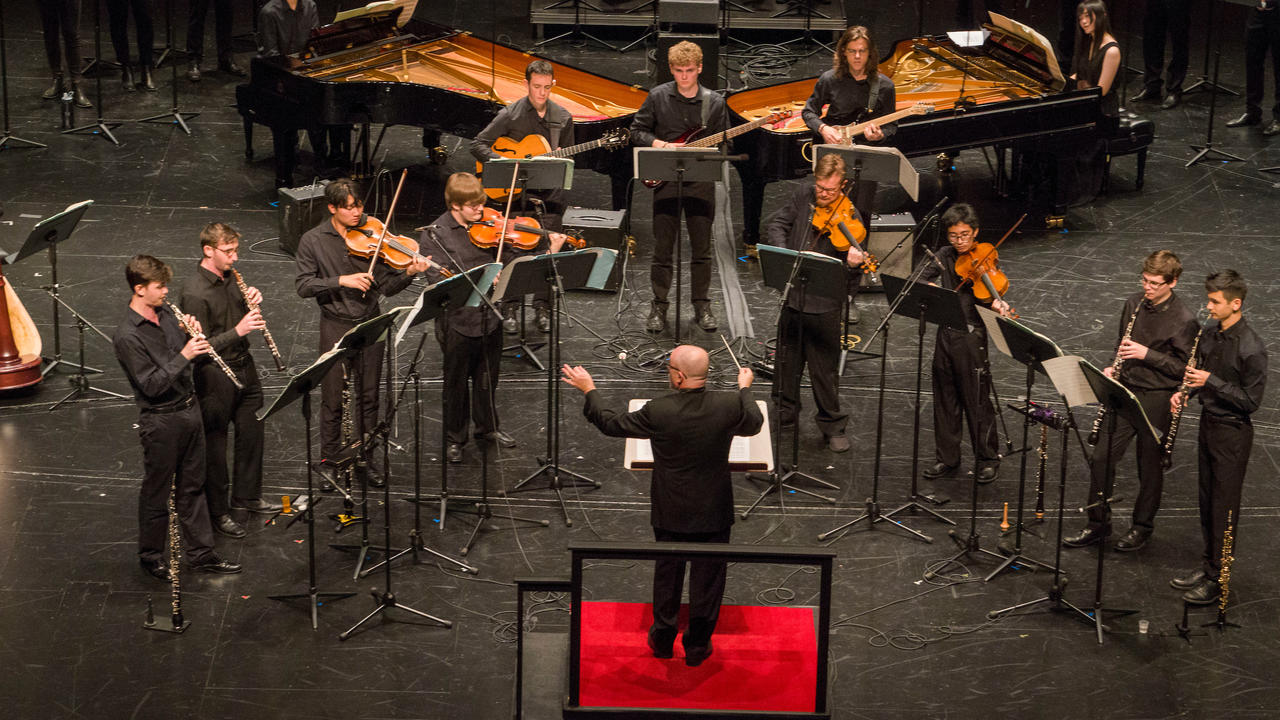