Crumbs From the Table of Joy by Lynn Nottage, Directed by Melissa Maxwell

The Flick by Annie Baker, Directed by Zi Alikhan

All performances take place in the Stephanie P. McClelland Drama Theater at Juilliard.

While Juilliard Drama Division performances are not open for review, we invite members of the press to enjoy these productions featuring the next generation of actors.

Barbara Undershaft, a major in the Salvation Army, is forced to examine her moral assumptions when her estranged father, a millionaire arms dealer, makes a sizable donation to the organization. With his signature wit, Shaw critically examines charity, faith, justice, and family in his provocative 1905 play. More than a century later, Major Barbara continues to ignite debate among audiences and artists alike: Is it money or poverty that is the greatest evil?

Written by Juilliard playwriting alumna Tanya Barfield, Bright Half Life follows Vicky and Erica through the ups and downs of their deeply committed four-and-a-half-decade relationship. The play flashes back and forth across the years, blurring boundaries of time, memory, and fantasy. The New Yorker described the play as “profound – a well-written, engaging portrayal of smart women finding themselves, and each other.”

The second play of 2018 MacArthur Foundation “genius" grant fellow Dominique Morisseau’s Detroit Project trilogy, Paradise Blue finds jazz joint owner and musician Blue at a crossroads between the future and his past. When his Black Bottom neighborhood is threatened by gentrification and a mysterious woman arrives, the fate of his Paradise Club and the community which has formed there hangs in the balance. Underscoring this haunting drama are the soulful and heartbreaking cries of Blue’s jazz trumpet.

Crumbs From the Table of Joy

Godfrey, recently widowed, is spellbound by a charismatic preacher while his teen daughters, Ernestine and Ermina, find refuge from the racial prejudices of 1950s Brooklyn in Hollywood movies. With the arrival of their fiercely independent Aunt Lily, things suddenly change: Godfrey marries a white woman displaced from war-torn Germany, Ermina discovers boys, and Ernestine is torn between communism and bebop. From the pen of two-time Pulitzer Prize winner Lynn Nottage, the play examines a family’s process of grief and healing in a decade of political, racial, and social upheaval in the United States.

In this 2014 Pulitzer Prize-winning play, audiences are given a glimpse into the lives of three Worcester, Massachusetts movie theater employees on a routine workday. As they clean the spilled popcorn and discarded candy cartons left by their patrons, Sam, Rose, and Avery reveal their buried desires for life and love and try to make at least some of their dreams reality.

Keith Reddin’s dramatization of the novel by Mikhail Bulgakov

Struggling writer Sergei Maxudov becomes the surprise envy of the Moscow literary elite when his play is chosen to be produced by the Independent Theatre. However, his hopes of a glorious life in the theater are soon dashed as he confronts Soviet bureaucracy, artistic disputes, and a revered artistic director of supposed mythic powers. The play and the darkly satiric novel on which it’s based are inspired by Bulgakov’s own experiences with the Moscow Art Theatre and its renowned director, Konstantin Stanislavski, at the onset of Stalinist repression in the 1920s.

Brandon J. Dirden starred on Broadway as Martin Luther King Jr. in the Tony Award-winning production of All the Way, with Bryan Cranston, and as Booster in the recent Tony Award-winning revival of August Wilson's Jitney. Additional Broadway credits include Clybourne Park, Enron, and Prelude to a Kiss. Off-Broadway, he has appeared in The Piano Lesson, for which he won Obie, Theatre World, and Audelco awards; The First Breeze of Summer and Day of Absence at Signature Theatre; Detroit ’67 at the Public Theater and Classical Theatre of Harlem; and Peter and the Starcatcher at New York Theatre Workshop. On screen he has appeared in The Good Wife, For Life, The Big C, Public Morals, Manifest, The Get Down, The Accidental Wolf, Blue Bloods, The Quad, and four seasons of FX’s The Americans as Agent Dennis Aderholt. Dirden is a frequent volunteer at the 52nd Street Project and a proud member of Actor’s Equity Association and Fair Wage On Stage.

Janet Zarish earned a BFA from Juilliard under John Houseman. An academic director and associate arts professor at New York University’s Tisch School of the Arts Graduate Acting Training Program, she has taught acting at the New York Shakespeare Festival, the Actors Center, the National YoungArts Foundation, Ensemble Studio Theatre, Manhattan School of Music, UCLA, USC and University of North Carolina School of the Arts, among others. As an actress, she has performed on and Off-Broadway, starring in such productions as Other People’s Money at the Minetta Lane Theatre, The Square at the Public Theater, and Miss Julie and An Enemy of the People at the Roundabout Theatre. From her association with Circle Rep and Ensemble Studio Theatre she has originated roles in many new plays, working with such writers as David Mamet, Shel Silverstein, Wendy Wasserstein and Terrance McNally. She was an original member of John Houseman’s the Acting Company under Houseman’s direction. Regional theatre credits include leading roles at the Long Wharf Theatre, the McCarter Theatre Center, Sundance Theatre Festival, the Shakespeare Theatre Company, Yale Rep, A Contemporary Theatre, Hartford Stage, Seattle Rep, the Old Globe, New York Stage & Film, and the Humana Festival at Actors Theatre of Louisville, working with such directors as Nycholas Hytner, Daniel Sullivan, Emily Mann, Mark Lamos, Michael Kahn, Sam Gold, Theresa Rebeck and Christopher Ashley. Film credits include Brooklyn to Manhattan, The Next Big Thing, Object of my Affection, Malcolm X, Danny, Mystic Pizza, Without a Trace, and The Zoo. She has guest starred on more than twenty television shows, including Blue Bloods, Forever, Law and Order, Seinfeld, and Mad About You. Zarish has directed at NYU’s Graduate Acting Program, Juilliard, Ensemble Studio Theatre, the Baryshnikov Arts Center, New York Theatre Workshop, the Sundance Institute and more. Among the plays she’s directed are Angel’s In America, A Doll’s House, Major Barbara, Picnic, Mrs. Warren’s Profession, and nine of Shakespeare’s plays. She directed the pilot presentation The Slope for CBS television. Zarish lectures across the country on acting and teaching, most recently as a guest teacher and lecturer at the International Theater Conference in Taipei, Taiwan.

About Evan Yionoulis, Richard Rodgers Director of the Drama Division at Juilliard

Evan Yionoulis, an Obie award-winning director and nationally recognized teacher of acting, is Juilliard’s Richard Rodgers director of the Drama Division. She comes to Juilliard after 20 years on the faculty of Yale School of Drama, where she was a professor in the practice of acting and directing and a resident director at Yale Repertory Theatre. She was Lloyd Richards chair of the department of acting there from 1998 to 2003. She has directed new plays and classics in New York, across the country, and internationally, including, most recently Guillermo Calderón’s Kiss at Yale Repertory Theatre and Adrienne Kennedy’s He Brought Her Heart Back in a Box for Theatre for a New Audience, where she also directed Kennedy’s Ohio State Murders (which won a Lortel Award for best revival). Her other credits include Richard Greenberg’s The Violet Hour (Broadway), Three Days of Rain (Obie Award for direction, Manhattan Theatre Club), and Everett Beekin (Lincoln Center Theater). With composer/lyricist Mike Yionoulis, she is developing Redhand Guitar, about five generations of musicians across an American century and The Dread Pirate Project, about identity and anonymity across the digital and natural worlds. She is a Princess Grace Awards recipient and serves on the executive board of SDC, the labor union representing stage directors and choreographers, as secretary.

About The Juilliard School’s Drama Division

Since its inception five decades ago, the Drama Division at Juilliard has become one of the most respected and renowned programs for theater artists in the world. The program is dedicated to educating versatile 21st-century theater artists and empowering them to thrive in an ever-evolving performing arts landscape.

Founded in 1968 by the celebrated American director, producer, and theater administrator John Houseman and the French director, teacher, and actor Michel Saint-Denis, the four-year drama program combines vocal and physical training, extensive work on text, and appreciation of style with a fierce commitment to emotional honesty, immense physical energy, and imaginative daring. The program is both highly selective and extremely rigorous, attracting committed and focused young actors.

Having long conferred BFAs and certificates, in the fall of 2012, Juilliard Drama began offering the degree of MFA, providing a diversity of experience for undergraduate and graduate students working side by side on projects that span classic texts of Shakespeare and Chekhov to contemporary works. This variety and breadth of repertoire ensures that Juilliard actors enter the profession with the experience and the craft to tackle the full spectrum of work and to bring to life the stories of writers who are deeply ingrained in theater history as well as the exciting work of living writers.

In fact, Juilliard actors have many opportunities to explore contemporary work during their training, as an essential component of their work within the Drama Division lies in collaboration with Juilliard’s playwriting fellows. The distinguished Lila Acheson Wallace American Playwrights Program, under the direction of Tony Award-winning playwright Marsha Norman and Pulitzer Prize winner and Juilliard alumnus David Lindsay-Abaire, encourages the development of fresh and diverse voices in the American theater and provides many opportunities for actors and playwrights to work together in the development of new work and to build lasting artistic relationships.

The Juilliard Drama program seeks not only to provide a challenging and full curriculum of training but also to give students valuable exposure to the professional world. Over the course of their studies, our actors have many opportunities to work with professional directors, who come in to work as teachers and guest artists as well as to direct productions.

The Drama Division also forges connections with the broader theater community as part of the strong ethos of citizenship and community service at Juilliard. In addition to many other opportunities for interdivisional collaboration between students, our actors and playwrights regularly join forces with music and dance students to use their art to reach out to underserved communities around the world.

Juilliard Drama’s outstanding creative reputation, distinguished faculty, and rigorous professional training have enabled alumni of the program to excel as artists, leaders, and global citizens for more than five decades and will continue to shape the future of American theater for decades to come. 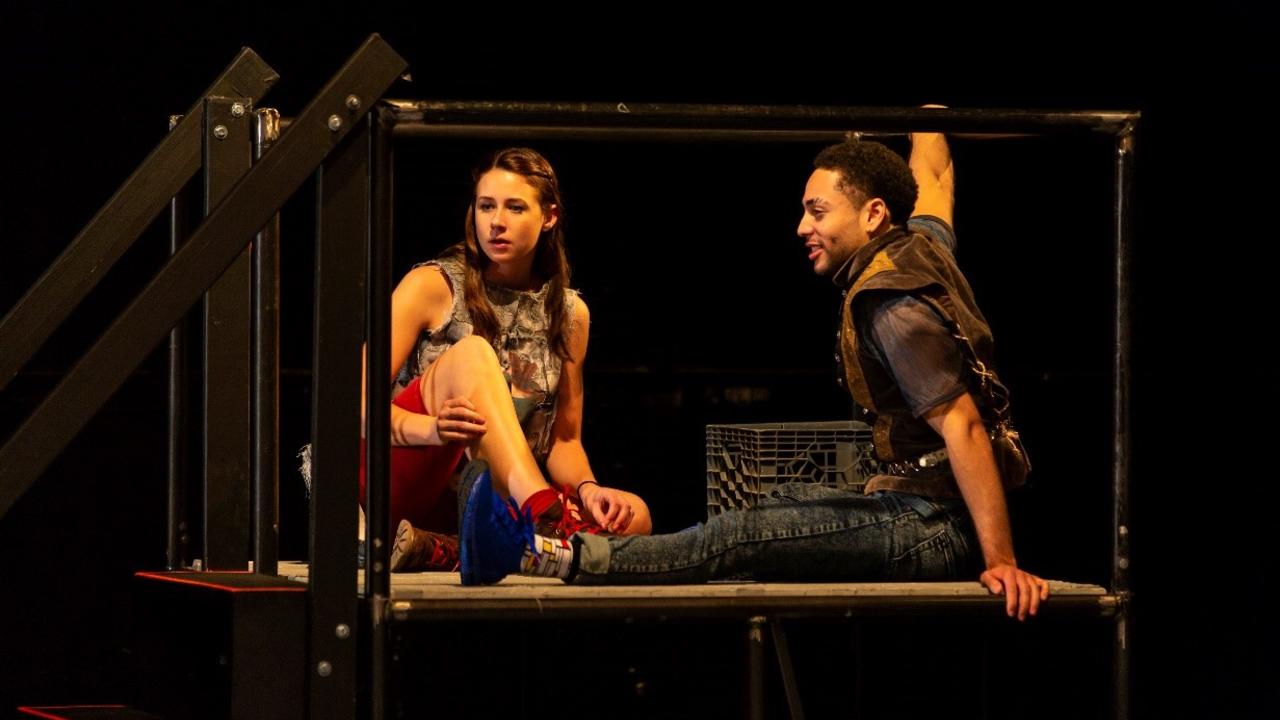