About the Composers and Program

Shulamit Ran’s music has been played by major orchestras, and she has been composer in residence with the Chicago Symphony Orchestra and Lyric Opera of Chicago, and she was a resident at the American Academy in Rome. Ran, the Andrew MacLeish Distinguished Service Professor Emerita at the University of Chicago, is composing Anne Frank, a full-scale opera with a libretto by Charles Kondek to premiere in November 2020. Fault Line, commissioned by the Chicago Symphony’s Music Now program, was begun in May 2005 and completed early the following year. She writes, “The title Fault Line is a metaphor for the volatility of human existence. Underneath even the most seemingly orderly of lives, fault lines lie, at times totally invisible on the surface, yet capable of erupting with the power to shutter and change all. Fault Line may be heard as a journal of a life, with all of its exuberance, energy, despair, triumphs and losses, wonder, brashness, and the grace of great tenderness.” The work is in three interlocking sections.

Magnus Lindberg studied composition at the Sibelius Academy where his teachers included Einojuhani Rautavaara (’56, composition) and Paavo Heininen. Lindberg founded the Ears Open Society, an informal group of composers that aimed for greater awareness of contemporary modernism. From 2009 to 2012 he was composer in residence at the New York Philharmonic, and he was composer in residence with the London Philharmonic Orchestra from 2014 to 2017. Souvenir, which commemorates the French composer Gérard Grisey (1946-98), was commissioned by the New York Philharmonic and Alan Gilbert (Pre-College ’85; MM ’94, orchestral conducting) and members of the Phil premiered it at Symphony Space.

Alexander Goehr, one of the founders and leaders of Britain’s mid-20th century avant-garde scene, was former chair of music at the University of Cambridge and is now an emeritus professor. He has received commissions from the Boston Symphony, BBC, Deutsche Oper am Rhein, Leeds Festival, Hamburg State Opera, Edinburgh Festival Ballet, Netherlands Wind Ensemble, and other ensembles and institutions. Recent works include the quintet after “The Waking” (2016-17), commissioned by Wigmore Hall and the Santa Fe Chamber Music Festival and premiered by the Nash Ensemble. Goehr’s fifth quartet, Vision of the Soldier Er (2018), was premiered earlier this year. His … between the lines was commissioned by the Berlin Philharmonic for its Scharoun Ensemble and receives its Western Hemisphere premiere at this concert.

Balázs Horváth studied composition at the Liszt Academy in Budapest with Zoltán Jeney, among others. In 2005, already a member of the academy’s faculty, he completed his doctorate, and now teaches music theory and 20th-century techniques. As a composer of mostly orchestra and ensemble music, he has won several prizes and has had performances in Hungary and abroad.He composed die ReAlisierung einer komPosition for rapper and orchestra in 2013 and reworked it for chamber orchestra for the New Juilliard Ensemble, which gives the new version its world premiere at this concert. Horváth writes: “In 2013, reading György Ligeti’s The Self-Questioning —a ‘self interview’—it really grabbed me how Ligeti perceived and explained the notion of creation.”

About Lila Duffy
Born in Coulommiers, France, soprano Lila Duffy began musical studies at 16 with voice and cello lessons. After earning a bachelor's degree in musicology at the University of Paris VIII and a vocal art diploma at the Conservatoire de Boulogne-Billancourt, she completed a master's degree in voice performance at the Université de Montréal in Rosemarie Landry's studio. She is studying at Juilliard with Edith Wiens in the Artist Diploma in Opera Studies program. Last summer, she participated in the Internationale Meistersinger Akademie in Neumarkt, Germany. While opera is her main artistic activity, she regularly gives recitals in Montreal and France, performing German lieder and French mélodies. Passionate about contemporary music, Duffy loves to collaborate with composers, singing works by José Evangelista and Ana Sokolović, among others. She holds the following scholarships: Georges Lurcy Graduate Music, Florence Page Kimball, Risë Stevens, and Hardesty and Beverley Peck Johnson.

About Michael Braugher
Michael Braugher is an actor and musician from South Orange, N.J. He received his bachelor’s degree from Oberlin College and is in his last year of the MFA program in the Juilliard Drama Division as part of Group 49. As an actor, he most recently played Jaques in As You Like It, directed by Ian Belknap. As a rapper, he has been the opening act for such notable artists as Kendrick Lamar and Mos Def; he has also composed music for ABC-TV’s Live! With Kelly and Michael as well as for several albums and documentaries. Braugher holds a Steinberg Fellowship.

About the New Juilliard EnsembleThe New Juilliard Ensemble, led by founding director Joel Sachs and in its 27th season, presents music by a variety of international composers who write in diverse styles. The ensemble appears regularly at MoMA’s Summergarden, has been featured four times at the Lincoln Center Festival, and has premiered some 100 compositions.

The New Juilliard Ensemble performs in Juilliard’s Focus festival; recent editions have included: On the Air!: A Salute to 75 Years of International Radio Commissioning (2019), China Today: A Festival of Chinese Composition (2018); Our Southern Neighbors: The Music of Latin America (2017); Milton Babbitt’s World: A Centennial Celebration (2016); and Nippon Gendai Ongaku: Japanese Music Since 1945 (2015).

About Joel Sachs
Joel Sachs, founding director and conductor of the New Juilliard Ensemble, performs a vast range of traditional and contemporary music as a conductor and pianist. As co-director of the internationally acclaimed new music ensemble Continuum, he has appeared in hundreds of performances in New York, nationally, and throughout Europe, Asia, and Latin America. He has also conducted orchestras and ensembles in Austria, Brazil, Canada, China, El Salvador, Germany, Hungary, Iceland, Mexico, Switzerland, and Ukraine, has held new music residencies in Berlin, Shanghai, London, Salzburg, Curitiba (Brazil), Newcastle Upon Tyne (U.K.), Helsinki, and the Banff Centre (Canada), and has given recitals of post-traditional piano music worldwide. 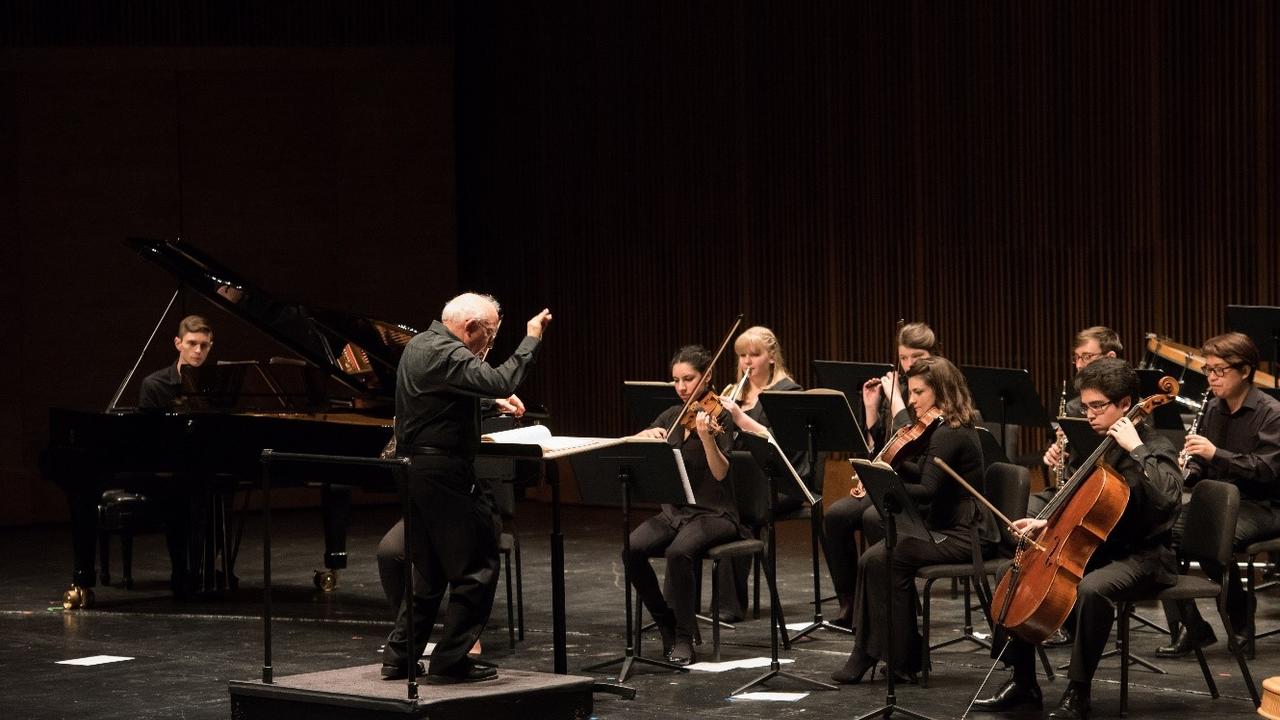