Masaaki Suzuki Conducts Juilliard415 and Yale Schola Cantorum in Telemann's "The Day of Judgment" on Saturday, November 2, 2019, at 7:30pm in Alice Tully Hall

Program Will Also Be Performed on Friday, November 1, 2019, at 7:30pm in New Haven at Trinity Lutheran Church

Der Tag des Gerichts was composed between 1755 and 1765 and was first performed in Hamburg in 1762 when Telemann was 81 years old. The text is by Christian Wilhelm Alers, who described it as a “Poem for Singing in Four Contemplations.”

The program will also be performed in New Haven at Trinity Lutheran Church (292 Orange Street, New Haven) on Friday, November 1, 2019, at 7:30pm.

Tickets for the November 2 concert at $20 ($10 for full-time students with a valid ID) are available at juilliard.edu/calendar.

Juilliard’s full-scholarship Historical Performance program was established and endowed in 2008 by the generous support of Bruce and Suzie Kovner.

Since founding Bach Collegium Japan in 1990, Masaaki Suzuki has established himself as a leading authority on the works of Bach. He has remained its music director ever since, taking it regularly to major venues and festivals in Europe and the U.S. In addition to working with renowned period ensembles, such as Collegium Vocale Gent and Philharmonia Baroque, Suzuki is invited to conduct repertoire as diverse as Britten, Beethoven, Fauré, Mahler, Mendelssohn, Mozart, and Stravinsky with orchestras such as the Baltimore Symphony, Danish National Radio Symphony, Deutsches Symphonie Orchester Berlin, Leipzig Gewandhausorchester, New York Philharmonic, and the San Francisco Symphony Orchestra, among others.

Suzuki’s discography on the BIS label, featuring all Bach’s major choral works as well as complete works for harpsichord, has brought him many critical plaudits. Bach Collegium Japan’s epic recording of the complete church cantatas, which was initiated in 1995 and comprises 55 volumes, was completed in 2014. This achievement received the 2014 Echo Klassick editorial achievement of the year award. Suzuki combines his conducting career with his work as an organist and harpsichordist.

Born in Kobe, he graduated from the Tokyo University of Fine Arts and Music with a degree in composition and organ performance and continued his studies in harpsichord and organ at the Sweelinck Conservatory in Amsterdam with Ton Koopman and Piet Kee. Founder and professor emeritus of the early music department at the Tokyo University of the Arts, he was on the choral conducting faculty at Yale School of Music and Yale Institute of Sacred Music from 2009 until 2013 and remains affiliated as the principal guest conductor of Yale Schola Cantorum. He regularly collaborates with Juilliard Historical Performance and toured New Zealand with Juilliard’s period-instrument ensemble, Juilliard415. Suzuki was awarded the Leipzig Bach Medal and in 2012 and the Royal Academy of Music Bach Prize in 2013.

The Yale Institute of Sacred Music is an interdisciplinary graduate center dedicated to the study and practice of sacred music, worship, and the arts. Institute students receive rigorous training for careers in performance, church music, pastoral ministry, the academy, and much more. The institute sponsors several choruses, including the Yale Camerata and Yale Schola Cantorum, and as a major arts presenter in New Haven, it offers a full schedule of concerts, art exhibitions, literary readings, lectures, conferences, and multimedia events during the year.

Yale Schola Cantorum is a chamber choir that performs sacred music from the 16th century to the present day in concert settings and choral services around the world. The Yale Schola Cantorum is sponsored by Yale Institute of Sacred Music and conducted by David Hill. Masaaki Suzuki is principal guest conductor. Open by audition to students from all departments and professional schools across Yale University, the choir has a special interest in historically informed performance practice, often in collaboration with instrumentalists from Juilliard415. Schola was founded in 2003 by Simon Carrington. In recent years, the choir has also sung under the direction of internationally renowned conductors Matthew Halls, Simon Halsey, Paul Hillier, Stephen Layton, Neville Marriner, Nicholas McGegan, James O’Donnell, Stefan Parkman, Krzysztof Penderecki, Helmuth Rilling, and Dale Warland. In addition to performing regularly in New Haven and New York, the ensemble records and tours nationally and internationally. On tour, Schola Cantorum has given performances in England, Hungary, France, China, South Korea, Italy, Greece, Turkey, Japan, Singapore, Russia, Estonia, and Latvia. Highlights of Schola’s 2018–19 season included a new commission by Paweł Łukaszewski and performances of Judith Weir’s In the Land of Uz, Pizzetti’s Requiem, Parry’s Songs of Farewell, and Vaughan Williams’ Mass in G Minor. The ensemble toured Scandinavia last spring.

Celebrating its 10th anniversary season, Juilliard415, the school’s principal period-instrument ensemble, has made significant contributions to musical life in New York and beyond, bringing major figures in the field of early music to lead performances of both rare and canonical works by composers of the 17th and 18th centuries. The many distinguished guests who have led Juilliard415 include Harry Bicket, William Christie, Monica Huggett, Nicholas McGegan, Rachel Podger, Jordi Savall, and Masaaki Suzuki. Juilliard415 tours extensively in the U.S. and abroad, having now performed on five continents, with notable appearances at the Boston Early Music Festival, Leipzig Bachfest, and Utrecht Early Music Festival (where Juilliard was the first-ever conservatory in residence), and on a 10-concert tour of New Zealand, where it returns for a second tour in spring 2020. With its frequent musical collaborator, the Yale Institute of Sacred Music, the ensemble has played throughout Scandinavia, Italy, Japan, Southeast Asia, the U.K., and India. Juilliard415 recently made its South American debut with concerts in Bolivia, a tour sponsored by the U.S. Department of State. In a concert together with the Bach Collegium Japan, conducted by Masaaki Suzuki, Juilliard415 recently played a historic period-instrument performance of Mendelssohn’s Elijah at the Leipzig Gewandhaus in Germany. Previous seasons have been notable for side-by-side collaborations with Philharmonia Baroque in San Francisco, as well as concerts directed by such eminent musicians as Ton Koopman, Robert Mealy, Kristian Bezuidenhout, and the late Christopher Hogwood.

Juilliard415, which takes its name from the pitch commonly associated with the performance of Baroque music (A=415), has performed major oratorios and Baroque operas every year since its founding, including the rare opportunity to see a fully-staged production of Rameau’s Hippolyte et Aricie during the 2017-18 season. During the 2018-19 season, the ensemble presented Purcell’s Dido and Aeneas at Opera Holland Park in London and the Royal Opera House of Versailles. A frequent collaborator with Juilliard’s Dance division, Juilliard415 premiered new choreography by Juilliard dancers in an all-Rameau program led by Robert Mealy and teams up again with Juilliard Dance this season for a new work choreographed by Andrea Miller.

Juilliard415 has had the distinction of premiering new works for period instruments, most recently for its Seven Last Words Project, a Holy Week concert at the Cathedral of St. John the Divine for which the ensemble commissioned seven leading composers, including Nico Muhly, Caroline Shaw, and Tania Leon. Highlights of the upcoming concert calendar include performances with William Christie and Les Arts Florissants at the Philharmonie de Paris; Handel’s Rinaldo conducted by Nicholas McGegan in New York and at the Göttingen Handel Festival in Germany; a program of music inspired by Shakespeare, led by Rachel Podger; the Juilliard415 debut of Pablo Heras-Casado in a program of music from the Spanish Baroque; and another side-by-side collaboration with Philharmonia Baroque in San Francisco.

Tickets for the November 2 concert at $20 ($10 for full-time students with a valid ID) are available at juilliard.edu/calendar. 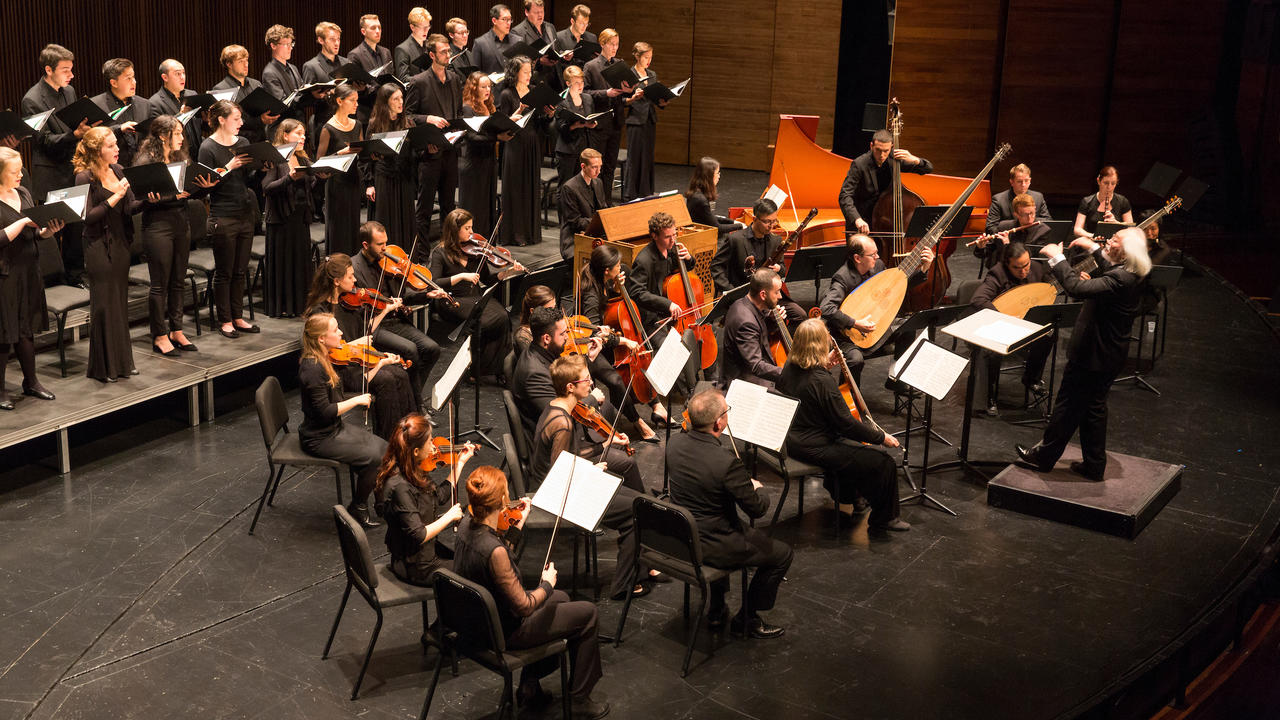