Così fan tutte was the last of the three collaborations between Mozart and librettist Lorenzo Da Ponte—the others being Le nozze di Figaro and Don Giovanni. The operas were composed between 1785 and 1790.

Tickets for Juilliard Opera productions are $40 ($20 for full-time students with a valid ID) and available at juilliard.edu/calendar.

This performance is part of Juilliard Opera, a program dedicated to the education and training of future generations of singers. Juilliard Opera is supported by the vision and generous lead funding of the International Foundation for Arts and Culture and its chairman, Dr. Haruhisa Handa.

Conductor and pianist Nimrod David Pfeffer (MM ’16, orchestral conducting) is an assistant conductor at the Metropolitan Opera and music director of the Lyric Opera Company of Guatemala. His recent conducting engagements include the Mariinsky Theatre Orchestra, San Francisco Symphony Orchestra, Hungarian State Opera Orchestra, Palau de les Arts Reina Sofía in Valencia, and Israeli Opera. This season he will make his conducting debuts with the Israel Philharmonic Orchestra and Hungarian National Philharmonic Orchestra. As a pianist, he has performed at Carnegie Hall, and the Kremlin, and as soloist with the Israel Philharmonic Orchestra. Pfeffer graduated from Juilliard’s orchestral conducting program as a student of Alan Gilbert. He is also a graduate of Mannes College of Music and the Metropolitan Opera’s Lindemann Young Artist Development Program.

David Paul is an award-winning director for opera, theater, and film. The Hamburg, Germany native’s directing highlights include productions at L.A. Opera, the Metropolitan Opera/Juilliard, Washington National Opera, Washington’s Shakespeare Theatre Company, Pittsburgh Opera, Arizona Opera, and Alaska’s Perseverance Theatre, among many others. His film Dichterliebe: POETLOVE garnered prizes at festivals around the world and streams on the PBS streaming platform All Arts; afterWARds, his contemporary reinvention of Mozart’s Idomeneo, celebrated its world premiere at Pittsburgh Opera earlier this year. Passionate about empowering young singers, Paul has worked with emerging artists on projects at Lyric Opera of Chicago, The Santa Fe Opera, Houston Grand Opera, and the Met, where he serves on the Lindemann Young Artist Development Program faculty. He has given master classes in Japan, China, Israel, and throughout the U.S., and lives in Brooklyn.

Tenor James Ley, from Maryland, is an Artist Diploma in Opera Studies student at Juilliard, where he studies with Edith Wiens. At Juilliard, Ley performed in a semi-staged performance of Winterreise with Brian Zeger in Alice Tully Hall, with the Juilliard Orchestra in L’enfant et les sortilèges conducted by Emmanuel Villaume, and as Don Ottavio in Don Giovanni. Last year he participated in Carnegie Hall’s SongStudio, where he worked with world-renowned teachers and coaches including Renée Fleming. This past summer, he premiered a role in the Salzburger Festspiele’s Kinder Oper. He has participated in the Festival d’Aix-en-Provence in the Mozart Académie and with the Nϋrnberg Symphoniker through the Internationale Meistersinger Akademie. Ley received his BM from Wheaton College, where he performed as Tamino in Die Zauberflöte and in Handel’s Messiah. He holds a Philo Higley Scholarship and is supported by the New York Community Trust/Anna Schoen René Fund and the Hardesty and Beverley Peck Johnson Fund.

Hailing from Cincinnati, mezzo-soprano Megan Moore is an Artist Diploma in Opera Studies student at Juilliard studying with Edith Wiens. Particularly at home in bel canto and Baroque music, Moore’s most recent professional engagements include singing Rosina in Il barbiere di Siviglia, the title role in La Cenerentola, Costanza in L’isola disabitata, and Arsamene in Serse. Moore has appeared in concert with the Charleston Symphony Orchestra and Indianapolis Baroque Orchestra as well as with the Eastman School Symphony Orchestra when she performed Berlioz’ Les nuits d’été as one of the school’s concerto competition winners. Passionate about art song and arts advocacy, Moore cofounded and remains active on the board of Lynx Project, an art song initiative recognized for commissioning songs with text by children with non-verbal autism. She holds the Rita Greenland Scholarship in Voice and the Barbara Rogers Agosin Scholarship and is supported by the Hardesty and Beverley Peck Johnson Fund.

Kathleen O’Mara is a soprano from Fort Washington, Pa. She graduated from Westminster Choir College with her BM in voice in spring 2018 and is studying for her MM at Juilliard with Edith Wiens. She has performed the title role in Gilbert and Sullivan’s Iolanthe and Zemire in André Grétry’s Zemire et Azor with Westminster Opera Theater, covered the First Lady in The Magic Flute with the CoOPERAtive Program, covered Barbarina in The Marriage of Figaro with Music Academy of the West, and covered the Governess in The Turn of the Screw and Donna Anna in Don Giovanni at Juilliard. She has participated in Curtis Summerfest, Houston Grand Opera’s Young Artist Vocal Academy, and Music Academy of the West. She is the recipient of a Toulmin Foundation Scholarship.

Bass-baritone William Socolof (BM ’18, voice), from White Plains, N.Y., began training at the Interlochen Arts Academy in Michigan. In 2019, he participated in the Marlboro Music Festival, where he returns next year. As a vocal fellow at Tanglewood Music Festival (2017-18), he appeared in Sondheim on Sondheim with the Boston Pops and Bach Cantatas conducted by John Harbison and premiered works by Michael Gandolfi and Nico Muhly. This season he debuted with the Boston Symphony Orchestra under Andris Nelsons and will appear as Don Alfonso (Così fan tutte), Daniel Webster (The Mother of Us All), and Colline (La bohème) at Juilliard. In December, he performs with the Juilliard Chamber Orchestra in Alice Tully Hall. He is pursuing his MM at Juilliard with William Burden. He is the recipient of a Toulmin Foundation Scholarship.

Baritone Erik van Heyningen, hailing from Poway, Calif., is an Artist Diploma in Opera Studies student at Juilliard, where he studies with William Burden. This past summer, he sang in a new production of Salome at the Spoleto Festival and appeared as Fernando in La gazza ladra with Teatro Nuovo. Van Heyningen appears with the Cecilia Chorus of New York in its upcoming performance of Bach’s Christmas Oratorio. In 2020, he will perform Escamillo in Carmen with Pacific Opera Victoria and Sprecher in Die Zauberflöte with The Santa Fe Opera. He spent two summers as an apprentice artist at Santa Fe, where he received the Donald Gramm Memorial Award. He also spent three summers with the Opera Theatre of St. Louis, where he received the Richman Memorial Award. He holds the Dr. Gary Portadin Scholarship, a Phil Higley Scholarship, and the Dr. Lee MacCormick Edwards Scholarship and is supported by the Hardesty and Beverley Peck Johnson Fund.

Soprano Mer Wohlgemuth, from Winter Haven, Florida, is pursuing her master of music degree at Juilliard, where she studies with Marlena Malas. Last season, she sang the role of Titania in A Midsummer Night’s Dream at the Chautauqua Institution, Belinda in Dido and Aeneas with Juilliard Opera and Juilliard415, and Tirsi in Clori, Tirsi e Fileno with Juilliard415 in Alice Tully Hall. Other productions include Nerone in L’incoronazione di Poppea and various productions of Die Zauberflöte as the Zweiter Knaben. She won the encouragement award at the 2017 Metropolitan Opera National Council Auditions (Upper Midwest Region). She earned her bachelor’s degree from Concordia University, Nebraska. She holds the Gail Chamock Scholarship, the Marion L. Dears Scholarship, and a Philo Higley Scholarship.

Kristen Robinson is a New York-based set designer whose work ranges from site-specific installations to outdoor Shakespeare. Selected credits include In the Green at LCT3; [PORTO] at WP Theater; Heart of Darkness at Baryshnikov Arts Center; Minor Character at Under the Radar Festival; Everybody Black and The Thin Place at Humana Festival, Actors Theatre of Louisville; Miller Mississippi at Long Wharf Theatre; Familiar at Steppenwolf Theatre; A Flea in Her Ear at Westport Country Playhouse; and Ethel at Alliance Theatre. She is the assistant professor of scenic design at Purchase College. A Princess Grace Fellow, she holds an MFA from Yale University. She is a member of USA 829.

About the Ellen and James S. Marcus Institute for Vocal Arts at Juilliard

Recognized as one of today’s leading collaborative pianists, Brian Zeger has performed with many of the world’s greatest singers in an extensive concert career that has taken him to the premiere concert halls throughout the United States and abroad. Recent recordings include Preludios—Spanish songs with Isabel Leonard, a recording of Strauss and Wagner lieder with Adrianne Pieczonka, Dear Theo: 3 Song Cycles by Ben Moore (Delos) with Paul Appleby, Susanna Phillips, and Brett Polegato, and All Who Wander, a recital disc with mezzo-soprano Jamie Barton.

The Cast (in order of vocal appearance):

Tickets for Juilliard Opera productions are $40 ($20 for full-time students with a valid ID) and available at juilliard.edu/calendar. 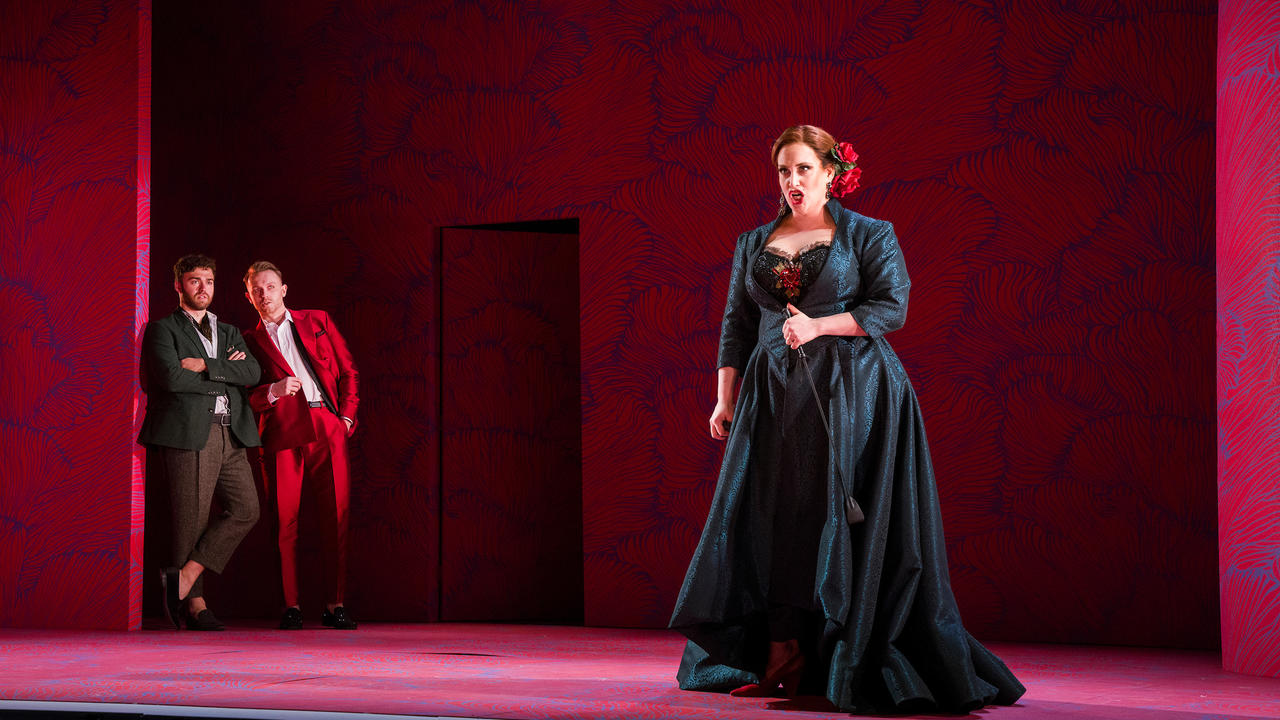