About the Composers and Program

Deirdre Gribbin (b. Belfast, 1967) studied at Queen’s University Belfast, the Guildhall School of Music and Drama in London, and in Denmark with Per Nørgård. In 2000, she received a Fulbright Fellowship for a year at Princeton University, and in 2001, she completed a PhD in composition at Royal Holloway College, University of London. Gribbin’s music has been performed at many international festivals, and she has received many commissions. Her recent works include a BBC commission, Goliath, for percussion and orchestra, and music for a BBC Radio 3 production of Dostoevsky’s The Possessed. The composer writes, “How to Make the Water Sound is the second in a sequence of water-inspired music. First Out of Water, focusing on ideas of rebirth and replenished spirit from Buddhist philosophy, used temple bells from Ladakh in India where I lived in the summer of 1996.”

Thai composer Narong Prangcharoen (b. 1973) received his first degree in Thailand from Srinakharinwirot University and his DMA from the University of Missouri-Kansas City, where his primary teacher was Chen Yi. He is now dean of the College of Music, Mahidol University, Thailand. He is also a composer in residence of the Thailand Philharmonic Orchestra, an artistic director of Thailand’s International Composition Festival, an artistic committee member of Beijing Modern Music Festival, an artistic advisor of Asia/America New Music Institute, and a vice president of China-ASEAN Musicians Union. His music has been performed in Asia, America, Australia, and Europe by many ensembles and orchestras, led by many well-known conductors. Far From Home, for solo cello, is dedicated to Nick Dinnerstein, who, the composer writes, “influenced me to write a solo cello piece, and gave the first performance. This piece reflects my exploration of the use of Western instrumental and compositional techniques to express the emotional and cultural characteristics of Thai traditional music.”

Eric Tanguy began his studies with Horaţiu Rădulescu and continued his education with Ivo Malec, Gérard Grisey, and Betsy Jolas at the Conservatoire National Supérieur de Musique in Paris, from which he graduated in 1991. He has been composer in residence at numerous locations in France, Denmark, Finland, and the U.K. Tanguy has received numerous awards and prizes, including the Grand prix de la SACEM—the composers’ rights agency, and has written more than 100 pieces, from solo to symphonic. Afterwards, for flute and piano, receives its New York premiere on this concert. The composer writes, “The title refers to the idea of musical memory within a score: how do we hear a section or patterns (obviously modified harmonically) reiterated in a work? This is also expressed in the meditative, although sometimes agitated, character and the nostalgic atmosphere, which emerges from this musical and poetical questioning.”

Alfredo Rugeles was born in Washington, D.C., in 1949, but has spent his life in Caracas, Venezuela. He began his musical studies in the Juan Manuel Olivares school of composition with Yannis Ioannidis, and from 1976 to 1981, was a fellow of Venezuela’s National Cultural Council, studying composition with Günther Becker and orchestral conducting with Wolfgang Trommer at the Robert Schumann Conservatory in Düsseldorf. He is now music director of the ensemble Nova Música of the Venezuelan Chamber Orchestra Foundation and artistic director of the Simón Bolivar Symphony Orchestra and the Circuito Sinfónico Latinoamericano Simón Bolívar. He teaches contemporary composition and orchestral conducting at the Instituto de Música de Caracas. Resistencia y Resiliencia, the composer says, is “both a song of protest, bitterness and tension, and at the same time a prayer of faith, trust, and hope for a better future for our beaten and beloved country, Venezuela.”

Julian Anderson was born in London in 1967 and studied composition with John Lambert, Alexander Goehr, and Tristan Murail. A Royal Philharmonic Society composition prize in 1992 for his two-movement work Diptych (1990) launched his career. Anderson currently holds the specially created post of professor of composition and composer in residence at the Guildhall School of Music and Drama. He has had residencies with the City of Birmingham Symphony Orchestra, the Cleveland Orchestra, and the London Philharmonic Orchestra. Van Gogh Blue was co-commissioned by the Serge Koussevitzky Music Foundation in the Library of Congress and dedicated to the memory of Serge and Natalie Koussevitzky, with the support of André Hoffmann, president of the Fondation Hoffmann, a Swiss grantmaking foundation, and Casa da Musica. Anderson has long been interested in the vast correspondence of Vincent Van Gogh. He writes, “Many letters testify to his [Van Gogh’s] love of color for color’s sake. Painting subjects are repeatedly chosen for their sheer color alone. Blue—cobalt blue, sky blue, deep blue, turquoises, azures, etc.—was a particular love, and receives more enthusiastic mention than any other color.” Van Gogh Blue is the last in a trilogy of ‘blue’ works by the composer. The work will have its New York premiere at this concert

The New Juilliard Ensemble, led by founding director Joel Sachs and in its 27th season, presents music by a variety of international composers who write in diverse styles. The ensemble appears regularly at MoMA’s Summergarden, has been featured four times at the Lincoln Center Festival, and has premiered some 100 compositions.

The New Juilliard Ensemble performs the opening concert of Juilliard’s annual Focus festival; recent editions have included: On the Air!: A Salute to 75 Years of International Radio Commissioning (2019), China Today: A Festival of Chinese Composition (2018); Our Southern Neighbors: The Music of Latin America (2017); Milton Babbitt’s World: A Centennial Celebration (2016); and Nippon Gendai Ongaku: Japanese Music Since 1945 (2015).

The ensemble’s 2019-20 season continues January 24, 2020, with the opening concert of the Focus festival, Trailblazers, a celebration of the pioneering generation of women composers born in the first 30 years of the 20th century. The NJE program, in the Peter Jay Sharp Theater, comprises music by Jacqueline Fontyn (Belgium), Elisabeth Lutyens (U.K.), Ursula Mamlok (Germany/U.S.), Ruth Crawford Seeger (U.S.), and Galina Ustvolskaya (U.S.S.R.). The concluding NJE concert, April 13, 2020, in Alice Tully Hall, will have five world premieres of music composed for NJE by Juilliard composition students Evan Anderson and Marc Migo Cortes, Chinese composers Ye Xiaogang and Yao Chen, and Mexican/German composer-singer Diana Syrse, who will be the soloist for her piece.

Joel Sachs, founding director and conductor of the New Juilliard Ensemble, performs a vast range of traditional and contemporary music as a conductor and pianist. As co-director of the internationally acclaimed new music ensemble Continuum, he has appeared in hundreds of performances in New York, nationally, and throughout Europe, Asia, and Latin America. He has also conducted orchestras and ensembles in Austria, Brazil, Canada, China, El Salvador, Germany, Hungary, Iceland, Mexico, Switzerland, and Ukraine, has held new music residencies in Berlin, Shanghai, London, Salzburg, Curitiba (Brazil), Newcastle Upon Tyne (U.K.), Helsinki, and the Banff Centre (Canada), and has given recitals of post-traditional piano music worldwide. 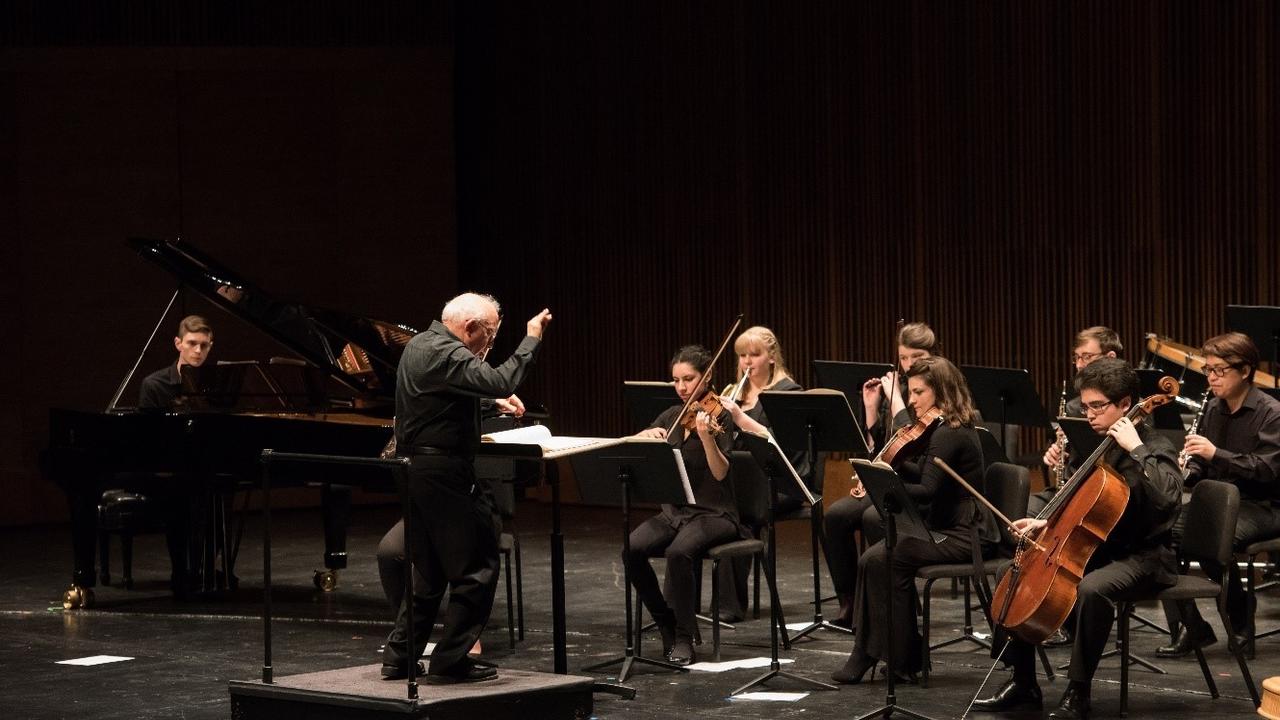