The ABQ will perform Three Madrigals by Luca Marenzio (1553-1599), edited by Raymond Mase. Marenzio was one of the leading Italian madrigalists and composed more than 500 works. His madrigals were immensely popular throughout Europe and were published not only in Italy, but also in Antwerp, Paris, Nuremberg, and London. The three madrigals performed on this concert are Scendi dal paradiso, Qual mormorio soave, and Gia torna a rallegrar and they are included on the recent ABQ recording of music of the Italian Renaissance, In Gabrieli’s Day.

Jessica Meyer is a versatile composer and violist. She has premiered pieces for solo viola internationally—expanding the repertoire for viola by championing new works and composing her own. Most recently, she was commissioned by Juilliard for its Historical Performance program for a concert of new works composed in response to Haydn’s Seven Last Words, that were performed last spring at the Cathedral of St. John the Divine. Luminosity was commissioned by the Women Composers Festival of Hartford for its 2016 festival and premiered by the Nautilus Brass. The composer writes, “Luminosity explores how brass instruments can convey the essence of various forms of light, both visible and invisible. While combining both expected and unexpected colors and textures that are unique to brass instruments, this work strived to capture a series of moments—from light that illuminates certain aspects of nature to the ineffable kind that radiates from within a particular person.”

Trevor Gureckis studied composition and piano at the Yale School of Music and the University of Texas at Austin. He has received numerous awards for his music, including a JFund commission from the American Composers Forum, a Charles Ives Scholarship from the American Academy of Arts, and young composer awards from both BMI and ASCAP Foundations. Fixated Nights (2010) was commissioned by the ABQ with funds from the Jerome Foundation. The work was premiered at the Aspen Music Festival in 2010 and received its New York premiere at Alice Tully Hall.

Fanfare Quintet by Jennifer Higdon was composed in 2002. This work is a movement from an organ and brass quintet piece called Ceremonies that was commissioned by the Philadelphia chapter of the American Guild of Organists when it hosted the group’s national convention. Higdon is one of America’s most acclaimed and most frequently performed living composers having received the 2010 Pulitzer for her Violin Concerto, a 2010 Grammy for her Percussion Concerto, a 2018 Grammy for her Viola Concerto, and the Nemmers Prize from Northwestern University, which is given to contemporary classical composers of exceptional achievement who have significantly influenced the field of composition. Higdon holds the Rock Chair in Composition at the Curtis Institute of Music.

Three Madrigals by Claudio Monteverdi (1567-1643) has been edited by Louis Hanzlik. Monteverdi wrote and compiled nine books of madrigals for vocal ensembles of varying size. The works represented in this edition are from the fourth and fifth books and were composed for five-part vocal ensembles. They were published in 1603 while Monteverdi was employed in the Mantuan Court under Duke Vincenzo Gonzaga. During Monteverdi’s time, madrigals were often performed by instrumentalists.

The final work on the program is Music of the Camino de Santiago by Tomás Luis de Victoria (1548-1611), edited by Patrick Quigley and Louis Hanzlik. The ABQ will be joined for this work by students from the quintet’s recent seminar. Victoria was one of the most accomplished composers of sacred music from 16th-century Spain. The three pieces that will be performed on this concert are Ave Regina caelorum; Gaude, Maria Virgo; and Regina caeli laetare.

About the American Brass Quintet

The American Brass Quintet is internationally recognized as one of the era’s premier chamber music ensembles. The group has earned its stellar reputation through its celebrated performances, genre-defining commissioned works, and ongoing commitment to the education of generations of musicians. Since its founding in 1960, the American Brass Quintet has performed on five continents, made nearly 60 recordings, and premiered more than 150 contemporary works for brass.

Committed to the development of brass chamber music through higher education, the American Brass Quintet has served as ensemble in residence at Juilliard since 1987 and at the Aspen Music Festival since 1970. President Emeritus Joseph Polisi said of the group, “With intelligence, artistry, and imagination, the American Brass Quintet has exemplified the highest standards of chamber music for brass instruments during its remarkable existence.” In 2017, the group launched the ABQ Seminar @ Aspen, a four-week brass chamber music intensive that offers the highest caliber of training for emerging brass quintets and musicians. Since 2000, the quintet also has shared its expertise in chamber music coaching and performance through a program of short residencies that feature regularly into the group’s touring schedule. Offering young musicians an intense chamber music experience over several days, the quintet’s residencies have been embraced by schools and communities throughout the United States and in a dozen foreign countries.

Among its numerous distinctions and citations, the American Brass Quintet is the 2013 recipient of the Richard J. Bogomolny National Service Award for significant and lasting contributions to the field, the highest honor accorded by Chamber Music America. 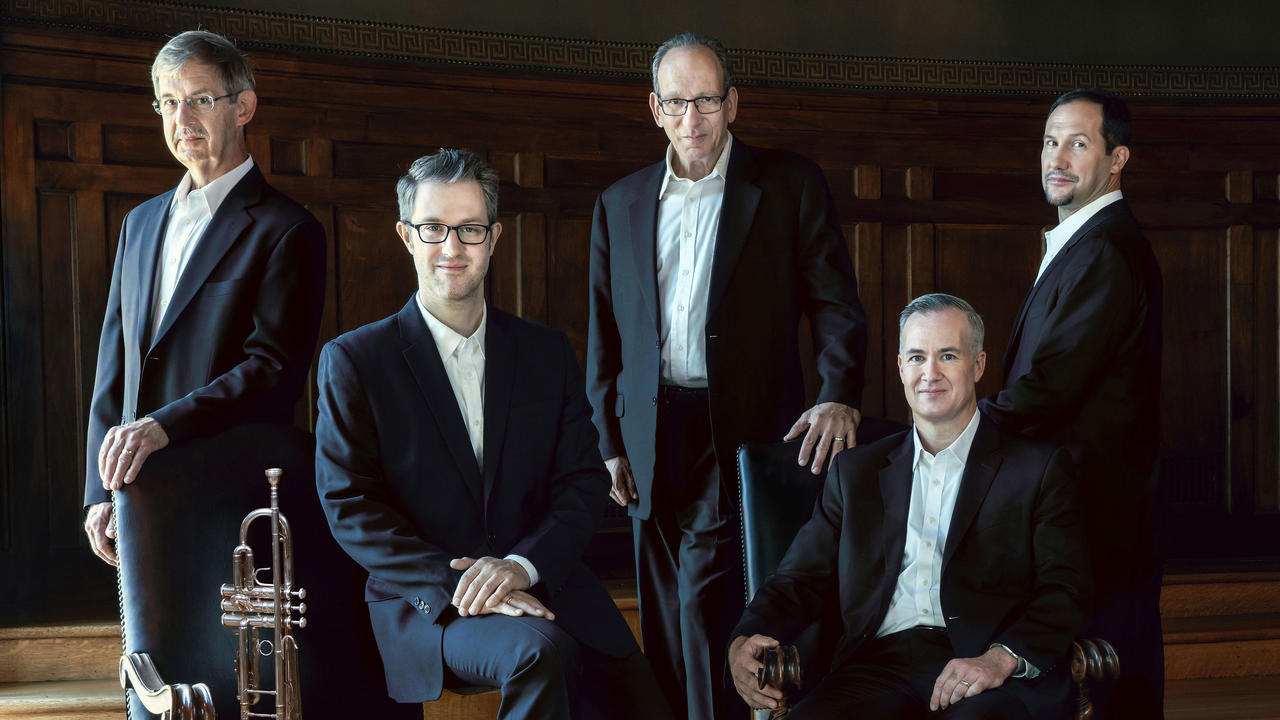 American Brass Quintet Performs Works From the 16th and 21st Centuries in a Recital on Wednesday, November 20, 2019, at 7:30pm in Paul Hall (photo by Jennifer Taylor)