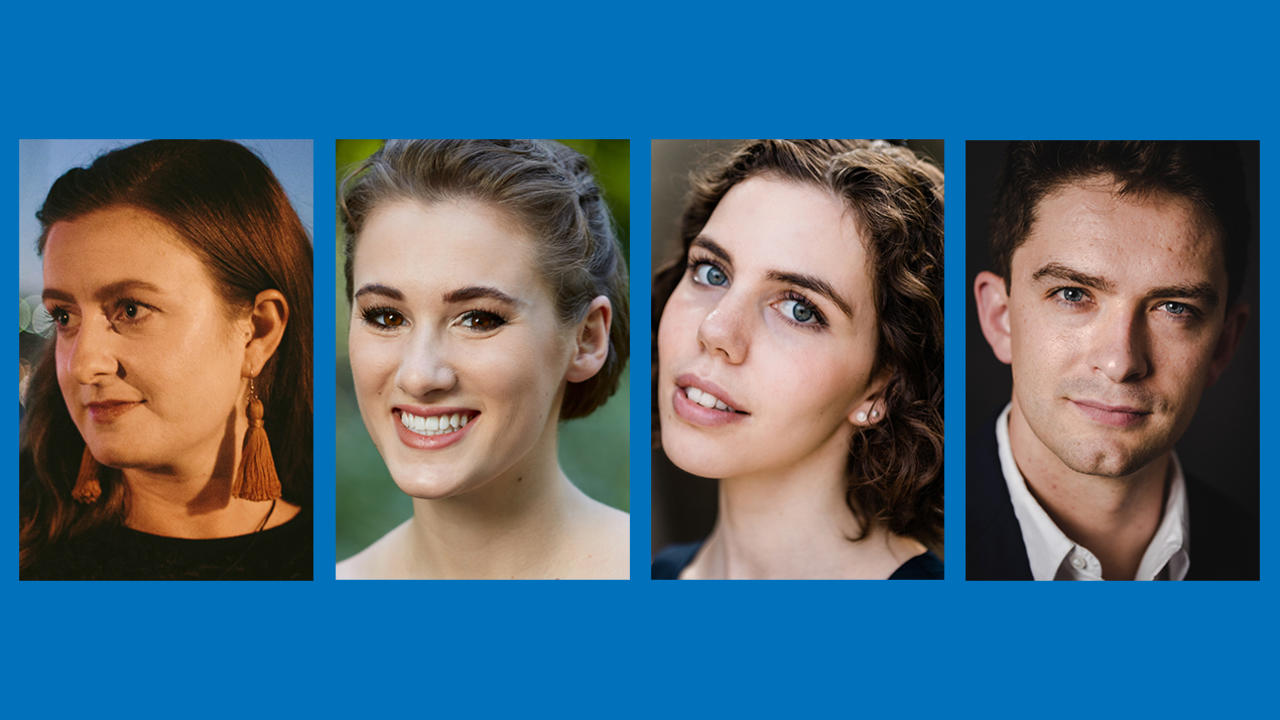 Please note that this event has been canceled due to COVID-19. Please visit Juilliard’s COVI9-19 Response page for more details.

NEW YORK –– Soprano Jessica Niles and baritone Gregory Feldmann are the winners of the Juilliard Vocal Arts Honors Recital for 2019-20 and will appear in a free joint recital on Thursday, March 19, 2020, at 7:30pm in Alice Tully Hall. Collaborative pianists Bronwyn Schuman and Grace Francis will perform with the singers.

The two students were nominated by their voice teachers to audition for this recital opportunity. The auditions were judged by a distinguished panel that included artist manager Matthew Horner, soprano Susanna Phillips (BM ’03, MM '04, voice), and Metropolitan Opera assistant conductor Bryan Wagorn.

Gregory Feldmann opens the program with Gabriel Fauré’s L’horizon chimérique, Op. 118; Franz Schreker’s Zwei Lieder, Op. 2; and Chris DeBlasio’s All the Way Through Evening. Jessica Niles performs selections from Hugo Wolf’s Goethe-Lieder; Ricky Ian Gordon’s “Will There Really Be a Morning?” from Too Few the Mornings Be; Aaron Copland’s “Sleep is Supposed to Be” from Twelve Poems of Emily Dickinson; and Ricky Ian Gordon’s “Wild Swans” from Finding Home and “This Is My Letter to the World” from Too Few the Mornings Be.

“Whenever we study art by someone not from our lifetime, we have the benefit of hindsight to see how a work fits into the grand scheme of an artist’s life,” Feldmann writes. “These songs are remarkable on their own merit, but it’s their interaction with the legacies of their creators that we find fascinating and strangely connected. The poets and composers on our concert would all see death and hate on a mass scale, during the course of two world wars, the Holocaust, and the AIDS crisis. Three of our artists would lose their lives in the course of these human tragedies.”

Mignon is a mysterious and waiflike character from Goethe’s novel, Wilhelm Meister. “My collaborator, Grace Francis, and I have selected poems by Emily Dickinson and Edna St. Vincent Millay for the program, and we hear Mignon’s voice in the longing for healing, freedom, and ultimately understanding,” writes Niles. “The innate human need to explore and express oneself to others and be heard is at the core of our common humanity. This is the essence of our recital; whether one communicates in movement, music, work, or any other medium, art strives to create a world of connection where the misunderstood are understood, and the alone feel that perhaps we are all alone together.”

Driven by a desire to explore and express the human experience through song, New York-based baritone Gregory Feldmann is a rising young artist on operatic and recital platforms. Feldmann’s 2020 season includes Virgil T. in Thomson’s The Mother of Us All and Marcello in Puccini’s La bohème with Juilliard Opera as well as Morales in Bizet’s Carmen with Opera Theatre of Saint Louis. Winner of the 2019 Joy in Singing International Song Competition, Feldmann and pianist Nathaniel LaNasa took their exploration of censored composers of the Third Reich to venues around the mid-Atlantic before making their debut in Carnegie Hall’s Weill Hall in February. Feldmann is an Artist Diploma of Opera Studies degree candidate at Juilliard under the tutelage of Elizabeth Bishop. He hails from York, Pennsylvania, and he holds the Southwick Norwood Scholarship, the R. Maurice Boyd Scholarship for Vocal Studies, and the Higley Scholarship, and is supported by the Hardesty and Beverley Peck Johnson Fund.

New Zealander Grace Francis is a student of Lydia Brown at Juilliard, where she is in the Master of Music degree program in Collaborative Piano (Vocal). She is a proud recipient of a Kovner Fellowship, and studies with the support of a Fulbright General Graduate Award. Francis received her BM (first class honors) in 2014, studying with Rae de Lisle at the University of Auckland, making professional concerto debuts as both pianist and harpsichordist during her studies. She has also performed in Canada and across Europe. Before arriving in the U.S., Francis worked as répétiteur for New Zealand Opera, university opera productions, National Aria contest, and as assistant director of GALS (Gay and Lesbian Singers). For nine years, she was a mentor and educator with youth organizations including Opera Factory and the Auckland Youth Choir, touring to Carnegie Hall in 2016 and the Australian International Music Festival in 2019.

Soprano Jessica Niles, a native of Alexandra, Virginia, is pursuing her Master of Music at Juilliard under the tutelage of Edith Wiens. She was awarded the Peter Mennin Prize for outstanding achievement and leadership during her undergraduate studies at Juilliard. Niles’ passions have led her to perform at Carnegie Hall and National Sawdust, to direct with Columbia University School of the Arts and City Lyric Opera, to collaborate with composers including Doug Balliett and Matthew Aucoin, and to curate recitals regularly within her community. She has performed as a soloist with MasterVoices, the Cecilia Chorus of New York, and Cantori New York. Concert highlights include Handel’s Aminta e Fillide with Les Arts Florissants at the Festival Dans les Jardins de William Christie, and Armida in Juilliard’s Rinaldo with Nicholas McGegan, which will tour to Göttingen International Handel Festival and SPOT Groningen. Niles was a Young Artist at Aspen Music Festival, performing Susanna in Le nozze di Figaro, and at Opera Theatre of St. Louis, where she also covered in the world premiere of Fire Shut Up In My Bones. Her previous roles include Zerlina in Juilliard's Don Giovanni, Adina in L'elisir d'amore, and Anne Page in Juilliard Opera’s production of Die lustigen Weiber von Windsor. She is the proud recipient of a Kovner Fellowship.

After living in Calgary, Canada, her whole life, Bronwyn Schuman moved to New York City in 2018 to pursue her Master of Music degree in Collaborative Piano at Juilliard with her primary teacher, Lydia Brown, and her other teachers, Jonathan Feldman and Brian Zeger. A two-time winner of Juilliard’s Vocal Arts Honors Recital in Alice Tully Hall, Schuman has also performed on WQXR’s Midday Masterpieces, in Juilliard’s Focus festival, and regularly in Juilliard’s Sonatenabend and Liederabend series. Prior to her studies at Juilliard, she completed her BM, studying with Edwin Gnandt at Ambrose University in Calgary, where she also completed her BA in English. She has attended the Franz-Schubert-Institut (Vienna), Mountain View International Festival (Calgary), SongFest (Los Angeles), and Toronto Summer Music. In addition to summer festivals, Schuman has held the operatic coach and accompanist fellowship at the Atlantic Music Festival (Maine) and the coach and répétiteur fellowship at Aquilon Music Festival (Oregon). Schuman holds the Bernard and Leigh Seder Scholarship, the L. & G. Goldberg Scholarship and holds an Irene Diamond Graduate Fellowship.

Recognized as one of today’s leading collaborative pianists, Brian Zeger has performed with many of the world’s greatest singers in an extensive concert career that has taken him to the premiere concert halls throughout the United States and abroad. Recent recordings include Preludios—an album of Spanish songs with Isabel Leonard, a recording of Strauss and Wagner lieder with Adrianne Pieczonka, Dear Theo: 3 Song Cycles by Ben Moore (Delos) with Paul Appleby, Susanna Phillips, and Brett Polegato, and All Who Wander, a recital disc with mezzo-soprano Jamie Barton.

“Will There Really Be a Morning?”

“Sleep is Supposed to Be”

From Too Few the Mornings Be

“This Is My Letter to the World”