Returning From Tour to a Changed World 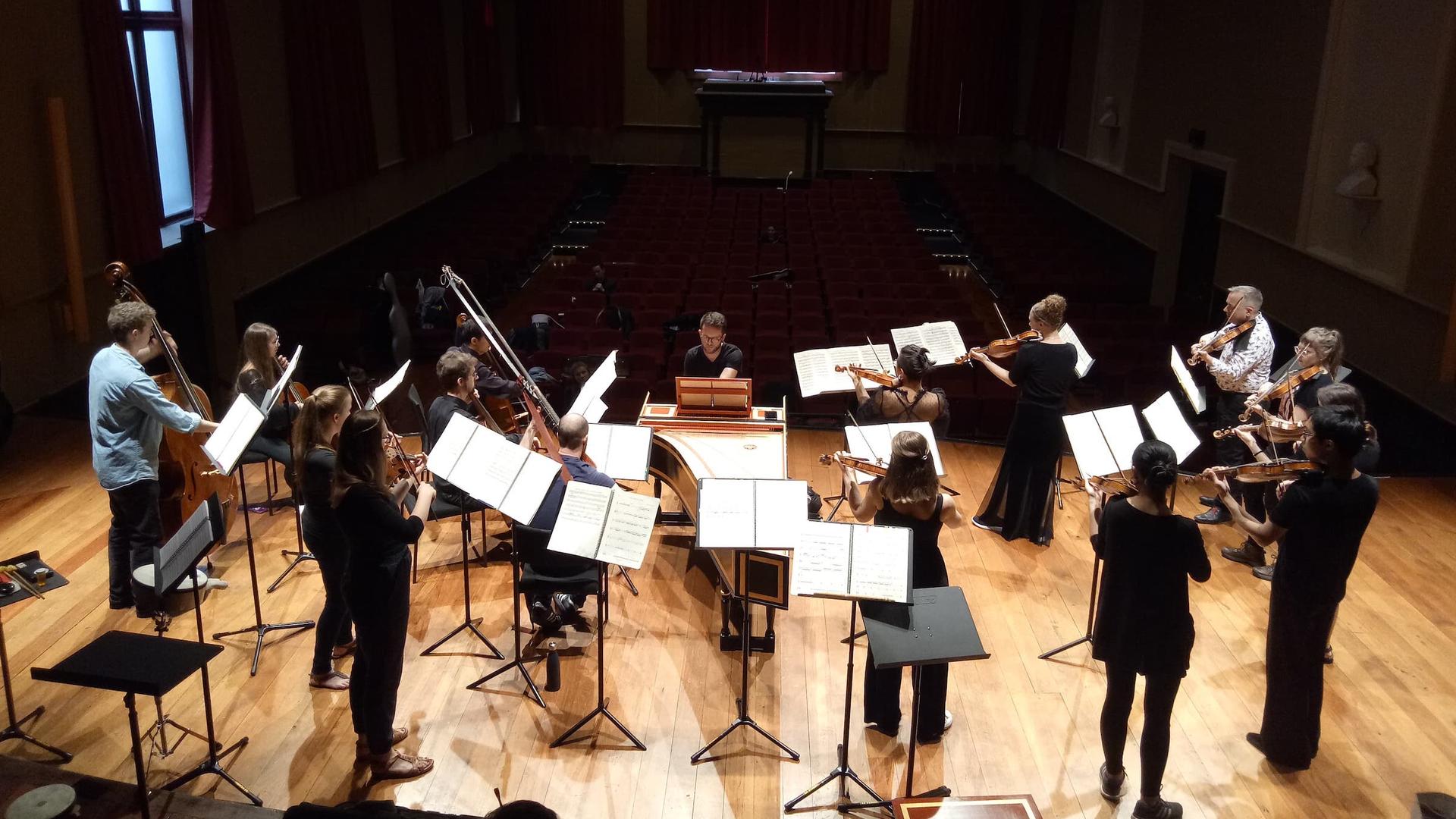 Juilliard415 performing in New Zealand; poignantly, this ended up being the last in-person Juilliard ensemble performance of the 2019-20 school year

Anemoia, or “nostalgia for a time you have never known.” This early-2010s neologism, appearing in the Dictionary of Obscure Sorrows, accounts for the millennial appetite for Downton Abbey and Stranger Things as much as it explains my own affinity for historical performance. One very long month ago I was in Invercargill, one of the world’s southernmost cities, about to walk on stage with Juilliard415 for the 10th and final performance of Juilliard415’s tour across New Zealand. Playing the first notes of a Handel overture some 9,300 miles from 65th and Broadway, but just inches from my closest friends, I wondered if there was a word to describe nostalgia for something that wasn’t quite yet finished.

On February 24, Juilliard415 set out on an extensive tour of New Zealand. Under the leadership of Robert Mealy and with the organizational guidance of Chamber Music New Zealand and our own Rosemary Metcalf, the assistant administrative director of Historical Performance, J415 had the privilege and pleasure of bringing the orchestral music of Gillian Whitehead, George Frederic Handel, Georg Muffat, Arcangelo Corelli, Antonio Vivaldi, Jean-Baptiste Lully, Marin Marias, and Jean-Philippe Rameau to 10 cities across the North and South islands.

The tour was just shy of three weeks long, a compact trip that had us spending no more than two nights in any one place. We found a brisk rhythm of travel and performance and were grateful for so many moments of togetherness both on- and offstage. One warm afternoon on the North Island, we visited Te Rangimarie Marae for pōwhiri, the Māori welcoming ceremony. We exchanged friendly words, songs, and the hongi greeting, and later that evening we were enthralled by profound backstage performances on Māori musical instruments. “Time stopped during the hongi,” second-year flutist Taya König-Tarasevich said. “Growing up in Siberia, studying in Europe and the United States, and now performing in faraway New Zealand, in that moment of connection I felt so grateful for our global community, so loved, and so at home.”

Morning runs, hikes, and walks introduced us to stellar vistas, amazing coffee, and friendly locals, many of whom attended our performances. One such listener, whom violinist Shelby Yamin and I met on a hike, was thrilled to experience live baroque music for the first time at our concert later that day. Visits to verdant parks introduced us to the tuatara lizard, bright blue pukeko bird, and some of the biggest ferns I have ever seen. And yes, we saw kiwi birds!

Still, our idyll was laced with whispers of a growing global pandemic. Passing comments unfolded into genuine concern from friends and relatives back home, inboxes and newsfeeds flooded with difficult words, and serious messages from Juilliard’s president, Damian Woetzel, made it clear that we would return to a world very different from the one we had left just weeks before. Time Steps Out of Line, the title of Gillian Whitehead’s work commissioned for this New Zealand tour, is also a fitting description of a spring semester that has us redefining the neologism of normalcy.

Our creative progenitors have weathered similar storms. Epidemics have repeatedly interrupted and rewritten creative histories, shuttering theaters and altering the artistic paths of creators including William Shakespeare. With palpable irony, Juilliard415’s own spring project celebrating Shakespeare’s musical legacy was canceled for reasons that both he and his King’s Men would have intimately understood.

There is something ethereal about performing a Rameau chaconne in the farthest reaches of the world, in a place where summer is winter and winter is summer, where the sun rises over the Pacific, and where an inverted moon shines against the breathtaking southern sky. “The chaconne takes us on a trip, through variations that feel as different as the trees and landscapes across this beautiful country,” violinist Rebecca Nelson said one evening. “However long the journey and however far we stray, the chaconne theme returns like a warm hug, and always brings us home.”

Second-year baroque bassoonist Georgeanne Banker is weathering the pandemic in Portland, Oregon, with her boyfriend, an HP alum. She has been making reeds, slowly learning how to play the violin, discovering new running routes (at safe social distances!), brushing up on her Arabic, enjoying Zoom yoga with HP classmates, and connecting with friends, relatives, and her family’s border collie, Sophie, online. As a co-founder and the lead administrator of One Found Sound, an orchestra in San Francisco, she’s also been focused on finding innovative ways to stay connected though music and making sense of a new future that artists everywhere are navigating and creating together.