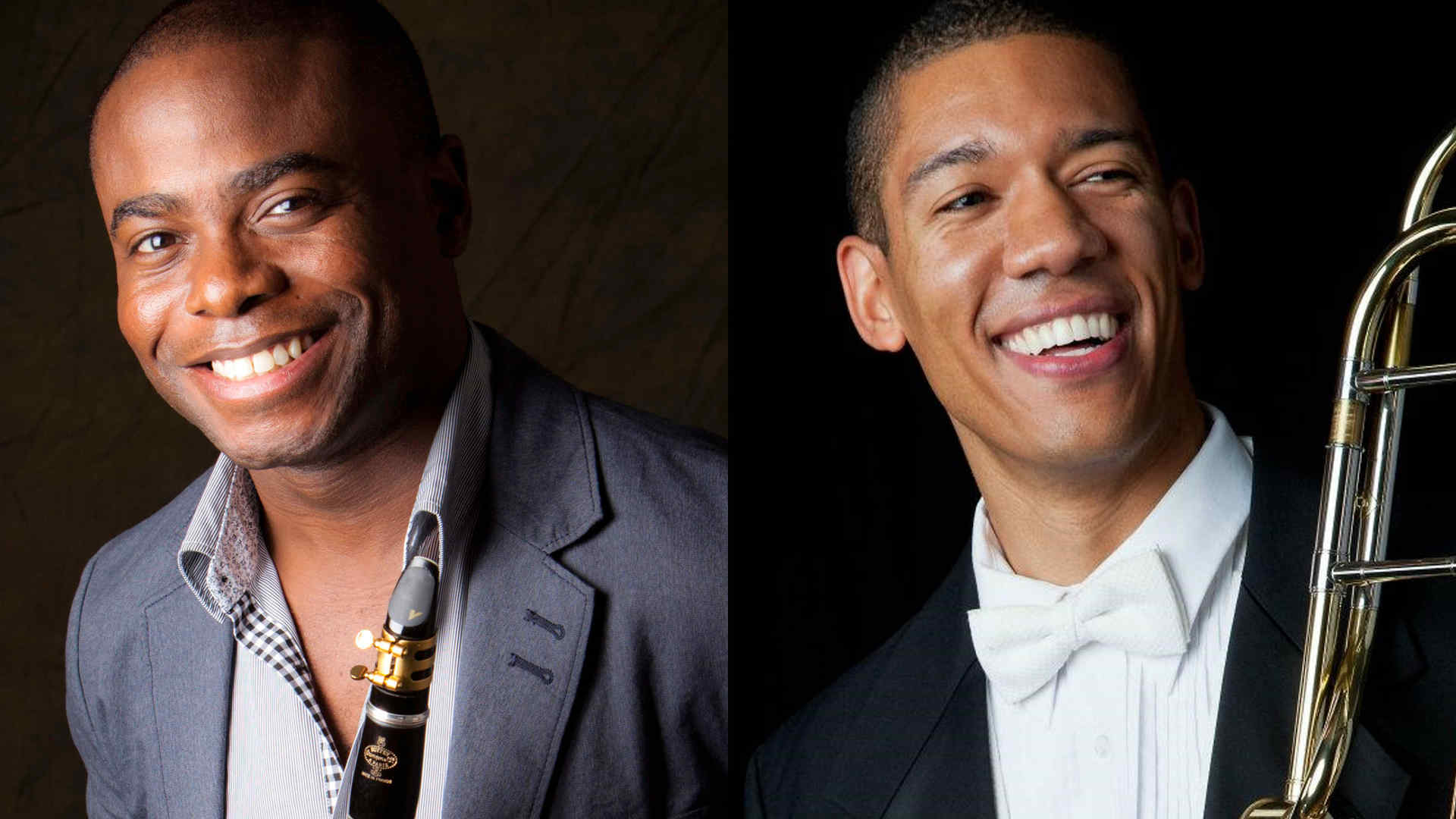 As the 2020 Avery Fisher Prize recipient McGill was invited to designate $30,000 to a charitable organization of his choice that further supports the Avery Fisher Artist Program’s mission. Through additional contributions from McGill and Sprott, MAP's new endowed fund is starting at $100,000.

MAP is Juilliard’s Saturday program for intermediate and advanced music students who demonstrate a commitment to artistic excellence. MAP actively seeks students from diverse backgrounds underrepresented in the classical music field and is committed to enrolling the most talented and deserving students regardless of their financial background. The program runs from September through May and has operated remotely during the pandemic.

Earlier today, it was announced that McGill is the recipient of the 2020 Avery Fisher Prize, given in recognition of musicians who represent the highest level of musical excellence and whose vision and leadership have expanded the reach of classical music. In lieu of the funds typically used to underwrite a traditional in-person celebration event, as a one-time-only additional gift, the Avery Fisher Artist Program invited McGill to designate $30,000 to an organization of his choice that furthers the program’s mission. After McGill selected Juilliard’s Music Advancement Program (MAP), he and Sprott made additional personal commitments to bring the endowed fund’s total to $100,000. (As the 2020 Avery Fisher Prize recipient, McGill receives a personal monetary award separate from the $30,000 that he is designating to MAP.)

Sprott explains, “Summer music programs are a formative part of a young musician’s journey. They provide specialized training and collaborative musical experiences that build upon the instruction students receive during the normal school year. When financial concerns prohibit families from sending their students to these festivals, it places them at a significant disadvantage compared to their peers. Anthony and I decided to create this fund to make sure there are continuing funds available to support our students, now and in the future.”

McGill shares, “So often we see highly talented young people who simply don’t have the means to attend summer programs and festivals. As a result, their training just stops during the summer months, and they lose out on all the opportunities found in connecting with artists, professionals, and audiences beyond their immediate sphere. For MAP students to fulfill their potential as artists, leaders, and global citizens, they need the experience of playing and moving in the world of classical music. I’m grateful to the Avery Fisher Artist Program for its support of MAP and contribution to this goal.” McGill, who maintains an active career as a soloist, is principal clarinetist of the New York Philharmonic and teaches on Juilliard’s college and MAP faculties. He is also an advocate for music education in underrepresented groups and for social justice.

“These summer experiences are key for our MAP students to continue their learning, training and growth as musicians,” Sprott says. “We invite others to join us in contributing to this fund, which will provide much needed support to our students and their families.” Sprott, who is also a trombonist with the Metropolitan Opera Orchestra, is an active soloist, teacher, and speaker on diversity and inclusion in classical music.

“On behalf of Juilliard, I am honored to accept this gift from Weston and Anthony, which will help our MAP students flourish through participation in off-campus summer activities,” Juilliard's president, Damian Woetzel, said. “With this extraordinary personal and professional commitment, Anthony and Weston are profoundly furthering the development of our young artists who might not otherwise be able to participate in these important opportunities. Their leadership is truly inspiring.”

For information on how contributions can be made to MAP and the Weston Sprott and Anthony McGill MAP Summer Scholarship Fund, please contact Katie Murtha, Director of Major Gifts, at [email protected].

The Music Advancement Program (MAP) is a Saturday program for intermediate and advanced music students from New York City’s five boroughs and the tristate area who demonstrate a commitment to artistic excellence. The program actively seeks students from diverse backgrounds underrepresented in the classical music field and is committed to enrolling the most talented and deserving students regardless of their financial background. Through a rigorous curriculum, performance opportunities, and guidance from an accomplished faculty, MAP students gain the necessary skills to pursue advanced music studies while developing their talents as artists, leaders, and global citizens. Approximately 70 students are enrolled in MAP, which is led by Artistic Director Anthony McGill and is generously supported through an endowed gift in memory of Carl K. Heyman.

One of the foremost music preparatory programs in the world, Juilliard Pre-College educates today’s most promising artists. The program offers a complete curriculum of music instruction for highly gifted children up to age 18. Students attend every Saturday for 30 weeks during the school year for an individualized course of instruction carefully designed to meet their particular needs. The selective program includes instruction in a chosen major, academic study of music, and solo and ensemble performances. Recognizing the importance of early development and discipline in the music field, the program provides a caring, collaborative, and challenging atmosphere where artistic gifts and technical skills can flourish. Approximately 300 students are enrolled in Pre-College.

Clarinetist Anthony McGill is one of classical music’s most recognizable and brilliantly multifaceted figures. He serves as the principal clarinet of the New York Philharmonic—and is that orchestra’s first African-American principal player—and maintains a dynamic international solo and chamber music career. Hailed for his “trademark brilliance, penetrating sound and rich character” (New York Times), as well as for his “exquisite combination of technical refinement and expressive radiance” (Baltimore Sun), McGill also serves as an ardent advocate for helping music education reach underserved communities and for addressing issues of diversity, equity, and inclusion in classical music. He was honored to take part in the inauguration of President Barack Obama, premiering a piece written for the occasion by John Williams and performing it alongside violinist Itzhak Perlman, cellist Yo-Yo Ma, and pianist Gabriela Montero. In the aftermath of the killing of George Floyd, on May 25, 2020, McGill launched a powerful musical protest video urging people to #TakeTwoKnees in demonstration against the death of George Floyd and historic racial injustice. His video went viral, and hundreds of artists and citizens amplified and responded to the protest with their own videos using the hashtag #TakeTwoKnees.

In 2015, McGill recorded the Nielsen Clarinet Concerto with Alan Gilbert and the New York Philharmonic. He also recorded an album with his brother, Demarre McGill, principal flute of the Seattle Symphony, and pianist Michael McHale; and one featuring the Mozart and Brahms clarinet quintets with the Pacifica Quartet, both released by Cedille Records.

A dedicated champion of new music, McGill premiered a piece written for him by Richard Danielpour entitled From the Mountaintop (2014), commissioned by the New Jersey Symphony, Kansas City Symphony, and Orchestra 2001. McGill served as the 2015-16 artist-in-residence for WQXR and has appeared on Performance Today, MPR’s St. Paul Sunday Morning, and Mr. Roger’s Neighborhood. In 2013, McGill appeared on the NBC Nightly News and on MSNBC in stories highlighting the McGill brothers’ inspirational story.

A graduate of the Curtis Institute of Music, McGill previously served as the principal clarinet of the Metropolitan Opera and associate principal clarinet of the Cincinnati Symphony Orchestra. In demand as a teacher, he serves on the faculties of Juilliard, Curtis, and Bard College Conservatory of Music. In fall 2020 he was named artist in residence at the Cali School of Music at Montclair State University. He also serves as the artistic director for the Music Advancement Program at Juilliard, on the board of directors for both the League of American Orchestras and the Harmony Program, and on the advisory councils for the InterSchool Orchestras of New York and Time in Children’s Arts Initiative.

Weston Sprott (Pre-College faculty 2016-present, MAP faculty 2008-15), who has been a trombonist in the Metropolitan Opera Orchestra since 2005, enjoys an exciting career that includes orchestral, chamber, and solo performances as well as numerous educational and outreach efforts.

As a soloist, he has performed regularly throughout the U.S., Europe, South Africa, and Asia, making his Carnegie Hall debut in 2007 and appearing with the Chamber Music Society of Lincoln Center in 2017. His debut album, Act I, was released in 2010. He has performed on countless recordings by the Metropolitan Opera and been recognized as “an excellent trombonist” with a “sense of style and phrasing [that] takes a backseat to no one.” Sprott designed and plays the “Courtois Creation–New York" model trombone. He has performed regularly with the Philadelphia Orchestra, held a position with the Zurich Opera/Philharmonia, and has appeared with numerous other major orchestras, including the New York Philharmonic, Atlanta Symphony, and Oslo Philharmonic. Previous posts include principal positions with the Pennsylvania Ballet Orchestra and Delaware Symphony Orchestra. Chamber music and festival engagements include Classical Tahoe, Festival Napa Valley, Walla Walla Chamber Music Festival, Chineke!, and numerous others.

A dedicated and tireless teacher, Sprott has served on the faculties of Mannes, Bard, and Purchase colleges and Rutgers University. During the summer, he is a regular faculty member of the SICMF, PRIZM, Curtis Institute of Music’s Summerfest, Carnegie Hall’s National Youth Orchestra-USA (NYO-USA), and NYO2.

Sprott is an active speaker, writer, and advisor for diversity and inclusion efforts in classical music. He is the founder and board chair of the Friends of the Stellenbosch International Chamber Music Festival (SICMF), a member of the Bronx Arts Ensemble’s artistic advisory board, and a recipient of the Sphinx Medal of Excellence and the Atlanta Symphony Orchestra’s Talent Development Program (TDP) Aspire Award. Sprott served for seven years as an officer of the Metropolitan Opera Orchestra committee and worked to establish the MetOrchestraMusicians nonprofit organization. He frequently works with and supports the Sphinx Organization, Play On Philly, and TDP. He has sponsored educational opportunities and solicited instrument donations for disadvantaged students and is a frequent guest speaker and panel facilitator on the topics of education and inclusion at leading classical music conferences.

Sprott holds a Bachelor of Music degree from the Curtis Institute of Music. His performances and interviews have been seen and heard on PBS’ Great Performances, NPR’s Performance Today, MSNBC, and Sirius Satellite Radio.

Located at Lincoln Center in New York City, Juilliard offers undergraduate and graduate degrees in dance, drama (acting and playwriting), and music (classical, jazz, historical performance, and vocal arts). Currently more than 800 artists from 40 states and 41 countries are enrolled at Juilliard, where they appear in more than 700 annual performances in the school’s five theaters; at Lincoln Center’s Alice Tully and David Geffen halls and at Carnegie Hall; and at other venues around New York City, the country, and the world. Beyond its New York campus, Juilliard is defining new directions in global performing arts education for a range of learners and enthusiasts through The Tianjin Juilliard School and K-12 educational curricula.