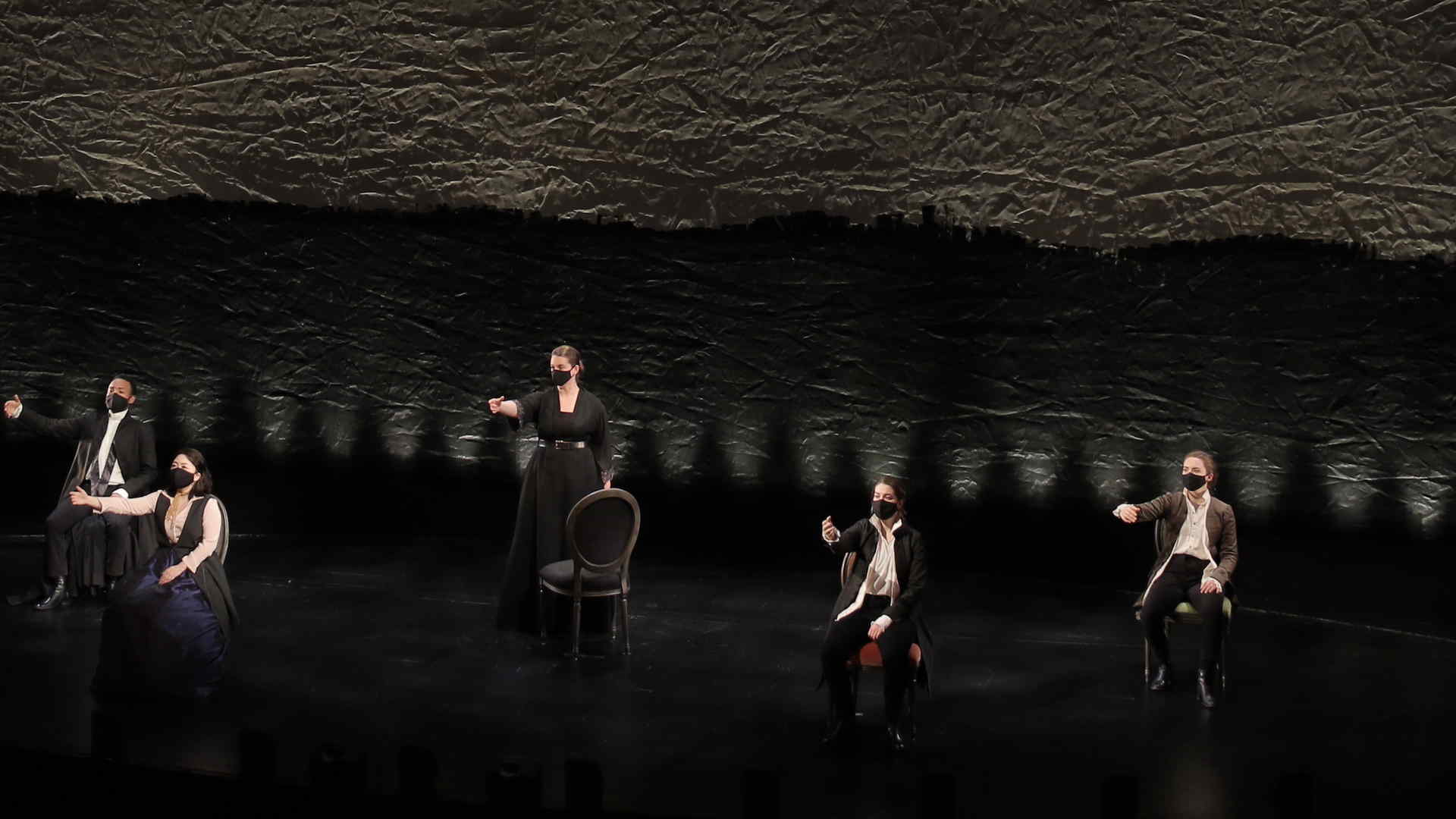 This article is adapted from one that appeared in VA Connects, the internal Vocal Arts newsletter. Amanda Seal, the Vocal Arts administrative apprentice, interviewed second-year master’s mezzo-sopranos Alma Neuhaus and Megan Moore about this spring’s production of Handel’s Teseo and the challenges of recording what would usually be a live production one singer at a time.

How were you able to collaborate given the challenges presented by COVID-19?
Alma: Normally, one of my favorite parts about rehearsing a role is playing off the energy of those around me and discovering how that makes my character react, especially in recitative. Distanced learning made me think about this process differently and reflect on these relationships in deeper ways. The limits of live collaboration were the most difficult when it came to learning the two duets between Arcane and Clizia. So many of the vocal lines are intertwined, and they move and breathe together. Normally, I would use a lot more visual communication with my duet partner at the entrances and cadenzas, but in this case, we are learning to trust each other through a microphone and a speaker from separate rooms. It has been eye-opening to see how much we are still able to communicate despite not being able to see one another.

It requires us to tell the story purely through our voices. While I cannot wait to get back to singing duets with another person in the same room, I am enjoying this process of learning to make music with others in new ways. Megan: Collaborating has been a challenge, but thanks to everyone’s hard work, we have really risen to it! Using the [revamped rehearsal rooms and new state-of-the-art] sound equipment in the Peter Jay Sharp Theater makes a big difference. Nothing could replace the “real thing,” but I’m so grateful for the creativity and hard work that allowed [this production] to take place.

In what ways have you adapted to singing and acting for a camera?
Megan: Working for the camera is not entirely different than how we are trained in the Artist Diploma program to act for the stage. The same release of the body, the same specificity, and the same absolute focus and presence are required. Working for the camera has called [for] a true mastery of this, though, as you really cannot get away with any lapse in any moment!

Alma: Throughout my time learning to act for the stage, there has often been a focus on making movements big enough for the person in the back row of a concert hall to see you and understand what you’re doing. Acting for the camera feels like the complete opposite. The smallest move can seem huge on-screen. This was a big challenge as we moved into singing for the camera last spring because I was having trouble finding the right balance of singing out and telling the story to the audience while not overdoing it. The biggest lesson I have learned is to trust that when I feel the emotion and really use the text, I am already communicating what I need to. I don’t need to add any physicality or try to make the camera understand what I’m trying to say. As we sing, we are naturally shifting with the text, emotion, and music, and trusting this allows us to stay truthful in our telling of the story. It feels grounded and honest, and it requires a deep understanding of the character and the scene. A momentary loss of focus is much more evident on film than from far away. In learning to trust myself with my storytelling, I am also learning how to stay more consistently focused and energized. Moving back to the stage will allow for some expansion, but I think that “acting for the camera” is at the core of everything we do.

What is the most valuable thing you’ve learned?
Megan: This process has required new levels of flexibility, spontaneity, and trust: trust in myself and trust in the process.

Alma: One of my main concerns going in was feeling too disconnected from the process because of the amount of work done virtually. I was worried that I would struggle to connect to my character and the other singers in the cast. Learning the role, however, proved extremely fulfilling. I was able to notice which things were the same as before COVID-19: score study, character study, learning the music, coaching the diction, coaching recitative, and discussing musical cues for arias. By the time we moved to socially distanced in-person sessions, I felt prepared to dive deeper into the story, explore my character, and work on stylistic elements. This experience showed me how much I am still able to work and grow in music no matter where I am. While a lot of the in-person events were different than before the pandemic, it was reassuring to know that not everything has changed. It’s all about trusting ourselves and trusting the process and moving forward.