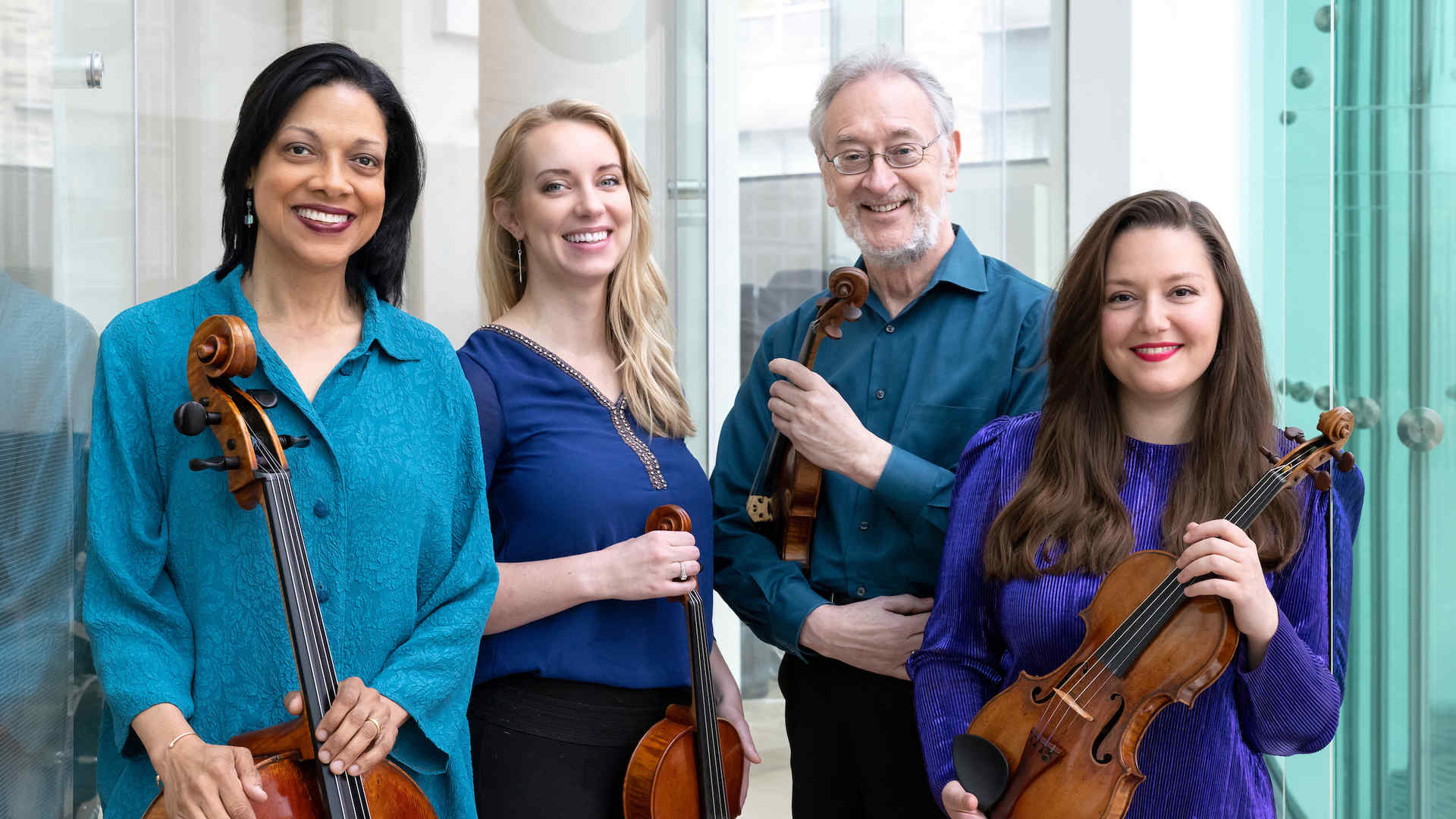 NEW YORK––The venerable Juilliard String Quartet (JSQ), which celebrates its 75th anniversary this season, has named violist Molly Carr to its ensemble, filling the void left by the passing earlier this season of the quartet’s much-loved former violist Roger Tapping. Carr (BM ’09, MM ‘11) is on the Pre-College faculty at the school, and with this appointment, joins the Juilliard college faculty. She also serves on the faculties of the Manhattan School of Music and Bard College Conservatory.

“The Juilliard String Quartet has had an extraordinary impact since its founding 75 years ago. Through successive generations of musicians, the quartet has made music of every time come to life,” said Juilliard’s president Damian Woetzel. “Now, after Roger Tapping's passing, we welcome a new voice to this continuum, Molly Carr, and it’s especially meaningful to know how she comes to this role with all of the energy and enlightenment passed on to her by Roger, who was a mentor and inspiration.”

“We are absolutely thrilled by the appointment of Molly Carr as the next violist of the Juilliard String Quartet,” said Adam Meyer, Juilliard’s provost. “Molly is a perfect fit as she embodies the values of the Juilliard String Quartet and the school in her work as a brilliant performer, experienced and dedicated teacher, and committed artist citizen. This appointment would have made Roger proud, and we are delighted to welcome her to this new role.”

Carr joins an ensemble—with violinists Areta Zhulla (Pre-College ’04; BM ’08, MM ’10) and Ronald Copes and cellist Astrid Schween (Pre-College ’80; BM ’84, MM ’85)—whose stellar reputation places it among the leading quartets worldwide. The group’s longevity—a result of its individual members’ unceasing dedication, creativity, and artistry—reaches countless fans and music lovers around the world each year, both live and through its expansive discography. The JSQ members are also devoted teachers who lead master classes, coachings, and private instruction at Juilliard, on tour, and with the fellows at the Tanglewood Music Center each summer.

“I am honored and so grateful to be joining the Juilliard String Quartet, an ensemble that I have looked up to and been inspired by my entire musical life,” Carr said. “It is such an immense privilege to be invited to follow my late mentor and friend Roger Tapping in carrying on the much-revered, decades-long traditions of this historic quartet, and having the opportunity to delve into some of the greatest music in the world on a daily basis with colleagues and friends like Areta, Ron, and Astrid is truly a dream come true. I cannot wait to get started!”

Committed to supporting the creation of invigorating new repertoire, the JSQ has a long-standing tradition of commissioning new works by composers including Lembit Beecher and Mario Davidovsky. This upcoming season brings premieres in Tucson of two quartets by the celebrated German composer Jörg Widmann—String Quartet No. 8 (Beethoven-Study III) and Cavatina—String Quartet No. 10 (Beethoven-Study V)—alongside late quartets by Beethoven. Additional highlights include the world premiere of Tyson Davis’ String Quartet No. 2, commissioned by the DaCamera of Houston and the John F. Kennedy Center for the Performing Arts; concerts with Itzhak Perlman, Emanuel Ax, and Jean-Yves Thibaudet at Carnegie Hall and in Toronto and Ann Arbor; plus two tours in Europe.

Areta Zhulla, Ronald Copes, and Astrid Schween said, “After the loss of our beloved colleague and friend Roger Tapping, we are thrilled to be welcoming Molly Carr as the new violist of the Juilliard String Quartet. Molly brings to our work together fantastic collaborative energy, a deeply probing curiosity and a passion for sharing that has marked the members of the quartet through its history. We are eager to start this next chapter with her!”

About Molly Carr
Violist Molly Carr (BM ’09, MM ’11) enjoys a diverse musical career as recitalist, chamber musician, educator, and artistic director. Hailed as “one of the most interesting interpreters of the viola today” (Codalario Spain) and praised for her “intoxicating” (The New York Times) and “ravishing” (The Strad) performances, she has been the recipient of numerous international awards, including the Primrose International Viola Competition, Chamber Music America, ProMusicis Foundation, and the Davidson Institute. In 2018 she was named by the Sandi Klein Show as one of America’s leading creative women, honored at the United Nations, and awarded the International Father Eugène Merlet Award for Community Service for her work in prisons and with refugees around the globe as the founding director of Project: Music Heals Us, a non-profit that brings free chamber music performances and interactive programming to marginalized populations with limited ability to access the arts. Her performances have taken her across North America, Europe, the Middle East, and Asia and she has been featured in the New York Times, Forbes, and the Wall Street Journal, as well as on PBS, CNN, NPR, and BBC World News. She serves on the faculties of Juilliard, Manhattan School of Music, and Bard College Conservatory.

About The Juilliard String Quartet
With unparalleled artistry and enduring vigor, the Juilliard String Quartet (JSQ) continues to inspire audiences around the world. Founded in 1946 and hailed by The Boston Globe as “the most important American quartet in history,” the ensemble draws on a deep and vital engagement to the classics while embracing the mission of championing new works, a vibrant combination of the familiar and the daring. Each performance of the Juilliard String Quartet is a unique experience, bringing together the four members’ profound understanding, total commitment, and unceasing curiosity in sharing the wonders of the string quartet literature.

Performances of the season include cities such as New York, San Francisco, and Detroit as well as a European tour including stops in Berlin, Dresden, and Essen. A special highlight of the 2022-23 season is the premiere of two string quartets by celebrated German composer Jörg Widmann to perform alongside late quartets by Beethoven.

Adding to its celebrated discography, the quartet released an album of works by Beethoven, Bartók, and Dvořák on Sony Classical in April 2021 to critical acclaim. Additionally, Sony Masterworks released a JSQ catalog release (The Early Juilliard Recordings) in June 2021. In the fall of 2018, the JSQ released an album on Sony featuring the world premiere recording of Mario Davidovsky’s Fragments (2016), together with Beethoven’s Quartet Op. 95 and Bartók’s Quartet No. 1. Additionally, Sony Classical’s 2014 reissue of the Juilliard Quartet’s landmark recordings of the first four Elliott Carter String Quartets along with the 2013 recording of Carter’s fifth quartet traces a remarkable period in the evolution of both the composer and the ensemble. The quartet’s recordings of the Bartók and Schoenberg Quartets, as well as those of Debussy, Ravel and Beethoven, have won Grammy Awards, and in 2011 the JSQ became the first classical music ensemble to receive a lifetime achievement award from the National Academy of Recording Arts and Sciences.

Devoted master teachers, the members of the Juilliard String Quartet offer classes and open rehearsals when on tour. The JSQ is string quartet in residence at The Juilliard School and its members are all sought-after teachers on the string and chamber music faculties. Each May, it hosts the five-day internationally recognized Juilliard String Quartet Seminar. During the summer, the JSQ works closely on string quartet repertoire with Fellows at the Tanglewood Music Center.

About The Juilliard School
Founded in 1905, The Juilliard School is a world leader in performing arts education. The school’s mission is to provide the highest caliber of artistic education for gifted musicians, dancers, and actors, composers, choreographers, and playwrights from around the world so that they may achieve their fullest potential as artists, leaders, and global citizens. Under the leadership of President Damian Woetzel since 2018, Juilliard is guided in all its work by the core values of excellence; creativity; and equity, diversity, inclusion and belonging (EDIB). Juilliard is committed to enrolling the most talented students regardless of their financial background.