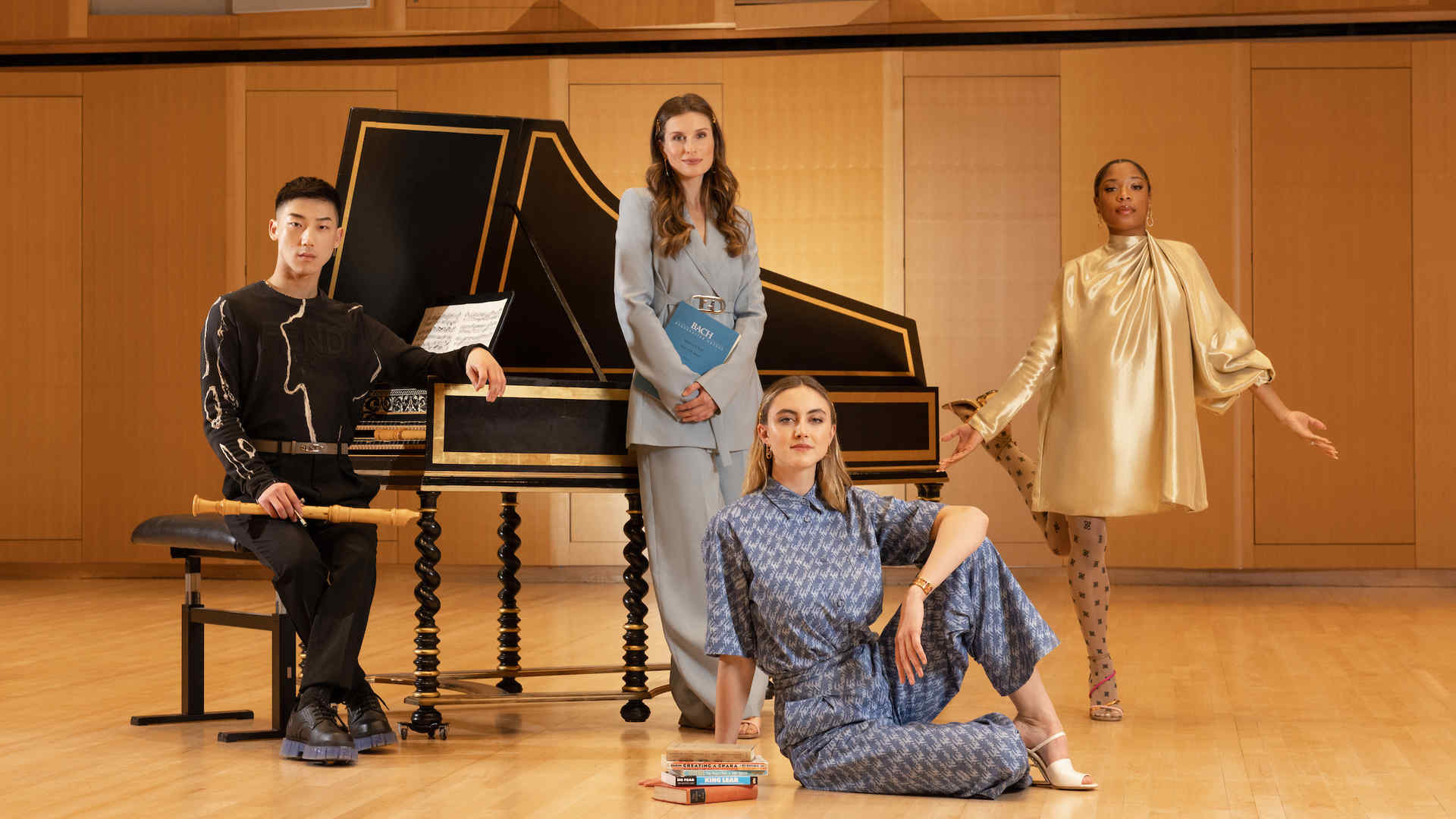 New York, NY, July 2022 – FENDI and Juilliard are pleased to announce the 2022 recipients of the FENDI Vanguard Awards.  Presented for the second year, this honor celebrates four students—one actor, one dancer, and two musicians—annually, who display the potential to be future innovators in their chosen discipline and across the performing arts. The 2022 Vanguards include Stella Everett (BFA ’23, drama) from Sydney, Australia; Raven Joseph (BFA ’23, dance) from Queens, New York; Peter Lim (MM ’23, historical performance—harpsichord) from Atlanta, Georgia; and Mary Beth Nelson (MM ’23, voice) from Orange County, California.  Each of this year’s recipients embodies the promise of a career in the vanguard.

This year’s awards continue the ongoing partnership between Juilliard and the Roman Maison, which began in December 2020 with the creation of an episode in the streaming series, FENDI Renaissance—Anima Mundi. At that time, FENDI made a significant contribution to Juilliard’s Scholarship Fund in the spirit of supporting creativity at every level and enabling young student-artists to realize their highest aspirations.

As FENDI Vanguard Award recipients, each selected student will receive a monetary prize; press and media opportunities; a collaborative performance opportunity at a FENDI corporate event hosted by Juilliard; individual mentorship opportunities with FENDI professionals; and the opportunity to be styled in FENDI for major professional and academic engagements over the next year.

Nominees for the FENDI Vanguard Award are chosen from among Juilliard students about to begin their final year of study in a bachelor’s, master’s, or advanced diploma program. Students are selected through a nomination process by divisional leadership and faculty.

"Juilliard cultivates creative artists who are pushing boundaries” said Juilliard’s provost, Adam Meyer. “Innovation is integral to excellence, and we are pleased to continue this collaboration with Fendi in that shared spirit.”

The inaugural cohort of FENDI Vanguards in 2021 included William Leathers (BM ’22, trumpet), Adam Phan (MM ’22, harp), Morgan Scott (BFA ’22, drama), and Cyrie Topete (BFA ’22, dance), all of whom have continued to accomplish honorable achievements over the past year. Leathers has been appointed principal trumpet with the Nashville Symphony beginning in the 2022-23 season and will simultaneously pursue an accelerated Master of Music degree at Juilliard. Phan recently appeared at Carnegie Hall and will return to Juilliard in the 2022-23 academic year to pursue an Artist Diploma. Scott has signed with Authentic Talent and Literary Management, and will be pursuing acting opportunities in theater, film, and television. Topete has joined Hubbard Street Dance Chicago as a member of its main company, beginning in the 2022-23 season.

Raven Joseph (Dance)
Raven Joseph, a native of Queens, New York, completed her high school education at Fiorello H. LaGuardia High School of Music & Arts and Performing Arts and has just finished her third year at Juilliard. Joseph began her dance training at the Edge School of the Arts, where she studied all styles. She continued her training at the Ailey School and MOVE|NYC| Young Professionals Program, where she enhanced her technique. As part of a foreign exchange program, Joseph has traveled to Beijing, where she learned classical Chinese folk dance and studied Chinese history. She has also had the opportunity to perform professional works by Alonzo King, Bill T. Jones, Kyle Abraham, and many more. Joseph was extremely humbled to have been a silver medalist for the NAACP ACT-SO in the dance modern category in 2017 and is currently a MOVE|NYC peer mentor and the social media strategist for Empower My Hood.

Stella Everett (Drama)
Stella Everett is originally from Australia, raised on the sun and surf of Sydney’s coastline. With the firm belief that growth as a human and as an artist are synonymous, experiencing new walks of life through travel has been a vital part of her development toward the pursuit of acting. After years of extensive travel, Everett began to hone her skills as a performing artist with the goal of attending a prestigious performing arts college. Upon graduation from high school, Everett was offered a place to study at the Western Australian Academy of Performing Arts  (WAAPA) and participated in its bachelor of acting program before being offered a place at Juilliard. Everett aims to continue to expand herself as an artist and as a human and make her mark as part of the next generation of storytellers.

Peter Lim (Music—Harpsichord)
Peter Lim focuses his artistic studies in historical keyboards, historical oboe, and historical flutes. Lim holds his bachelor’s degree in historical keyboards, historical oboe, and recorder performance at the historical performance department at Koninklijk Conservatorium Brussels. Previously, he attended the Oberlin Conservatory of Music. Lim has been an early music enthusiast since a very young age and continues to explore the revival of the early music of today. He has performed in master classes led by well-known scholars and performers of the early music world including Mitzi Meyerson, Benjamin Alard, Olivier Fortin, Charlotte Nediger, Skip Sempe, Jan de Winne, the Flanders Recorder Quartet, and Reine-Marie Verhagen. He was also a grand prize winner in the Korean International Early Music Competition.

Mary Beth Nelson (Music—Voice)
Mezzo-soprano Mary Beth Nelson sang the role of Ruth Bader Ginsberg in Derrick Wang’s comedic opera Scalia/Ginsburg at  the Glimmerglass Festival, where she was praised for singing with “virtuosic abandon … joyous flair and assured beauty of tone (Opera Today). She returned to Opera Las Vegas to sing the Notorious RBG after debuting as Angelina in Rossini’s La Cenerentola in 2018. Nelson is a finalist and encouragement award winner in the Loren L. Zachary Competition (2021), a prizewinner and audience choice favorite in the Rochester International Vocal Competition (2020), an encouragement award winner in the Metropolitan Opera National Council Auditions (2020, 2014), first place and people’s choice award winner in the 16th annual International Crescendo Music Awards, a finalist and top audience choice award winner in the ninth annual Lois Alba Aria Competition, a recipient of a Jensen Foundation honorarium (2020), an international semifinalist in the Houston Grand  Opera Eleanor McCollum Competition (2019), and a Career Bridges grant winner in New York City. Nelson trained at Glimmerglass, Florida Grand Opera Studio, the Seagle Music Festival, and Tri-Cities Opera. She holds a Bachelor of Music degree from Oklahoma City University and is a native of Orange County, California. marybethnelsonmezzo.com

About The Juilliard School
Founded in 1905, The Juilliard School is a world leader in performing arts education. The school’s mission is to provide the highest caliber of artistic education for gifted musicians, dancers, and actors, composers, choreographers, and playwrights from around the world so that they may achieve their fullest potential as artists, leaders, and global citizens. Under the leadership of President Damian Woetzel since 2018, Juilliard is guided in all its work by the core values of excellence; creativity; and equity, diversity, inclusion and belonging (EDIB). Juilliard is committed to enrolling the most talented students regardless of their financial background.

About FENDI
The house of FENDI was established by Adele and Edoardo Fendi in Rome in 1925. The opening of the first FENDI boutique—a handbag shop and fur workshop followed. Soon winning international acclaim, FENDI emerged as a brand renowned for its elegance, craftsmanship, innovation, and style. The collaboration with the late Karl Lagerfeld began back in 1965 and lasted 54 years; in 1992 Silvia Venturini Fendi followed him as artistic director. In 1994 she was given responsibility over leather goods accessories and then the direction of the menswear line. In 2000 the LVMH Group acquires FENDI, becoming in 2001 its majority shareholder. In September 2020, Kim Jones was appointed artistic director of couture and womenswear, while Delfina Delettrez Fendi, a fourth generation Fendi family member, joined the Maison as artistic director of jewelry.
Today FENDI is synonymous with quality, tradition, experimentation and creativity.
www.fendi.com
@fendi