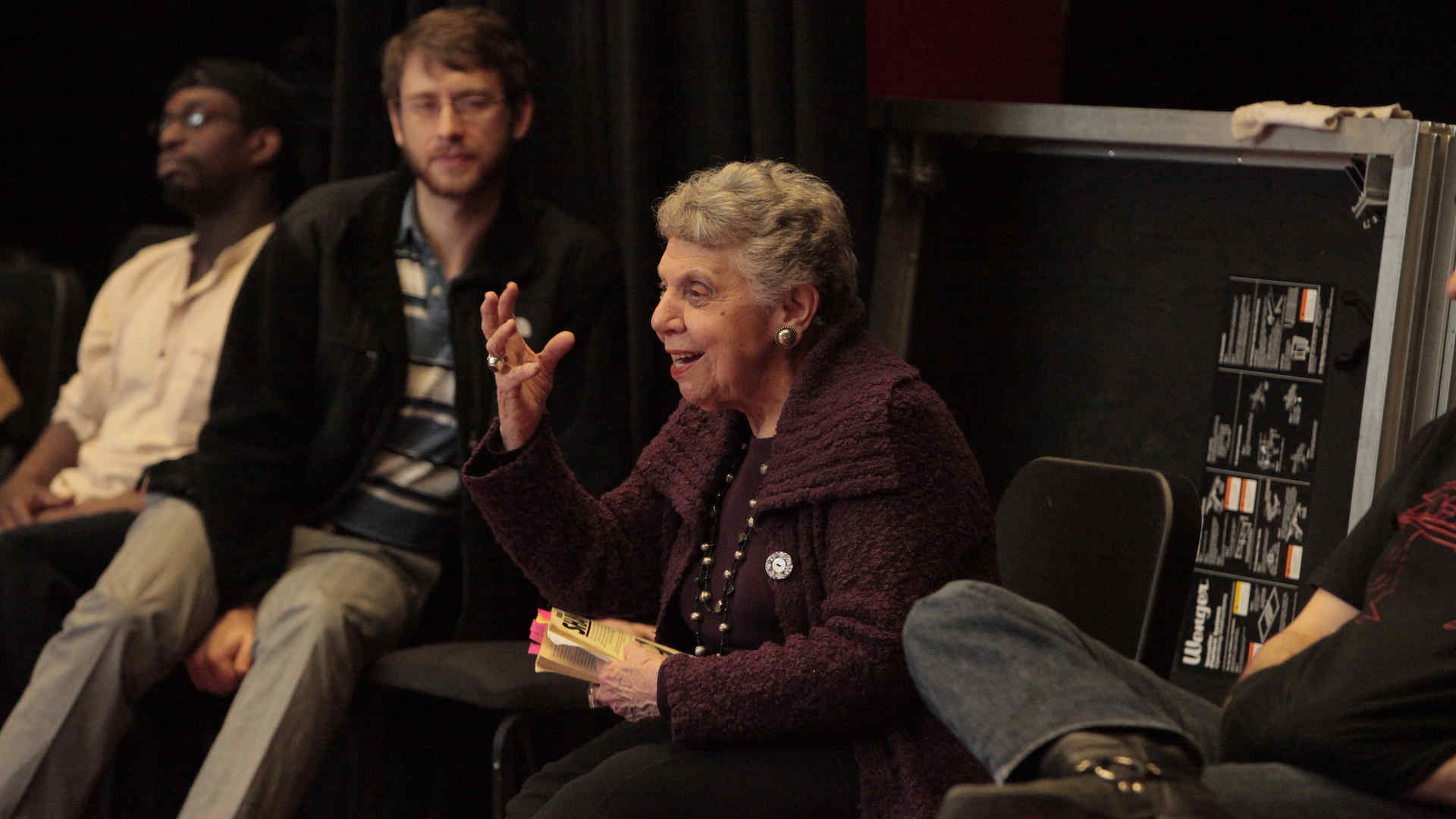 Longtime Juilliard faculty member Eve Shapiro died December 1, 2022 at 92. She served on the drama and vocal arts faculties, directed numerous plays and operas, and was also one of the primary acting coaches with vocal arts until becoming faculty emerita in fall 2020.

Shapiro came to Juilliard in 1976, after Alan Schneider, then artistic director of the Drama Division, invited her to direct Richard III. That production’s success, reflective of Shapiro’s deep familiarity with and passion for classical theater, led to her appointment to the faculty, and she would go on to direct more than 20 major productions, among them Another Part of the Forest, The Seagull, Uncle Vanya, Hedda Gabler, Heartbreak House, Man and Superman, Undiscovered Country, Top Girls, A Month in the Country, Six Characters in Search of an Author, The Winter’s Tale, Richard II, and The Importance of Being Earnest.

In 1988, then-president Joseph W. Polisi invited Shapiro to direct the Juilliard Opera Center production of The Crucible, she recalled in a 2002 Juilliard Journal interview with Gillian Jacobs (Group 33), then a drama student. That began more than 30 years in Vocal Arts, where Shapiro joined the faculty and directed operas including Così fan tutte, The Rape of Lucretia, Susannah, La Cenerentola, Eugene Onegin, Die Fledermaus, The Bartered Bride, and A Midsummer Night’s Dream.

Born in Pretoria, South Africa, in 1930, Shapiro won an award for best amateur theatrical production of the year when she was 17. She studied at the Royal Academy of Dramatic Art (RADA) in London and, in 1962, joined its faculty as a director and teacher. In England, Shapiro also directed productions at the York Theatre Royal, the Bournemouth Rep, and the Leeds Playhouse as well as a production of T.S. Eliot’s Murder in the Cathedral to celebrate the restoration of that cathedral, in York Minster. She also directed and taught at London’s Webber Douglas School, and worked in Malta, Switzerland, and South Africa. She assisted Gian Carlo Menotti on The Leper for the Spoleto Festival, and directed the Drama Division’s portion of the “Juilliard at 80” episode of Live From Lincoln Center in 1985.

In a 2016 Juilliard video interview, Shapiro said, “the wonderful thing about teaching is you never know how many lives you touch.” Clearly there were many. Tributes shared on social media by her students attested to how generous Shapiro was with her time and knowledge, recalling her as a mentor and friend as well as a teacher. She frequently reminded her students to, above all, be kind, and she would have them over to her apartment for coachings, to read and discuss passages from Shakespeare, dispense wisdom over tea, and bake scones together.

As expressed in an email the Drama Division sent to alums, “To know Eve was to be touched by an individual of supreme grace and elegance who possessed a keen wit and unwavering devotion to her students’ personal and artistic growth. She brought incredible heart and humanity to all of her endeavors and her one-of-a-kind presence will be greatly missed by all.”

Joshua Simka (BM ’14, voice) is assistant editor of the Journal 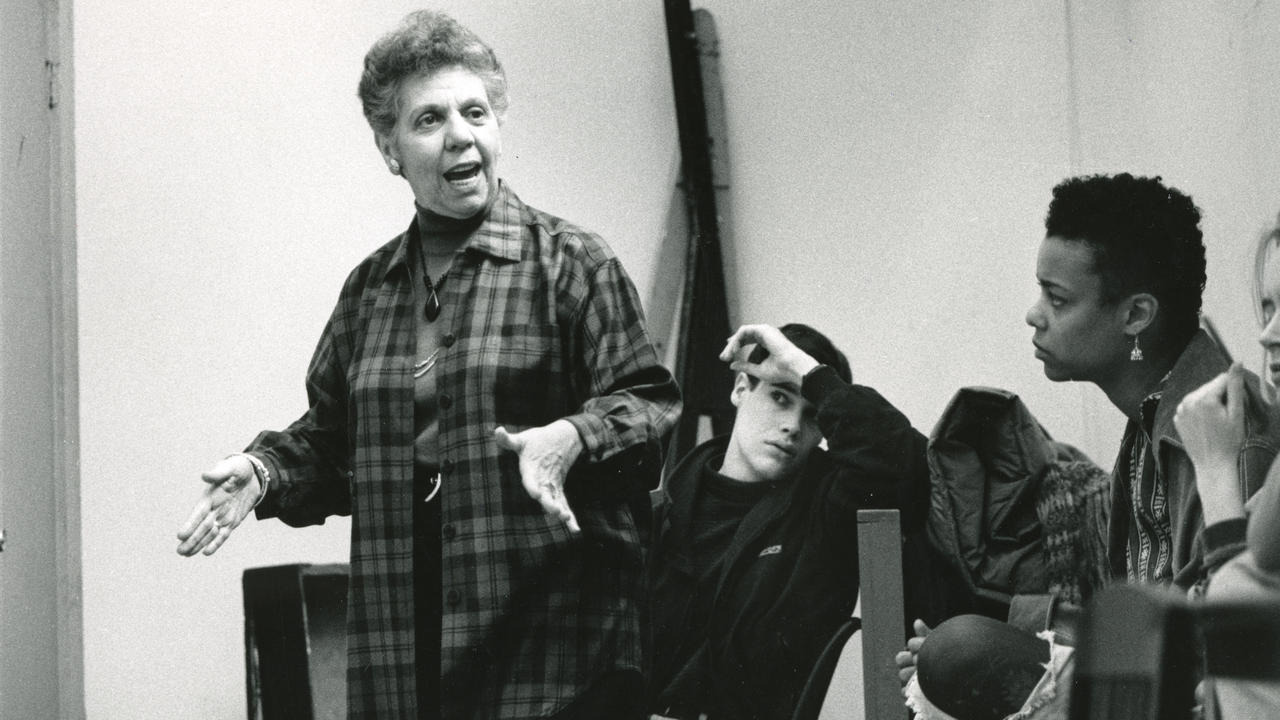 Shapiro teaching in the early 1990s

Faculty member Stephen Wadsworth worked with Shapiro to build, with Mary Birnbaum, a new version of Vocal Arts’ Artists Diploma program focused on the art and craft of acting. He paid tribute to his colleague.

Eve’s impeccable taste, deep knowledge of the dramatic repertoire, long experience at RADA in London and in the Juilliard Drama Division, her wit, her love of talent, and her utterly original and masterly pedagogy––incredibly gentle yet firm––made her inexpressibly dear to me and to years of students who found a singular haven with her, often over tea in her apartment, overlooking the Hudson River.

Eve was a diminutive woman with a huge thirst for a good laugh and an unswerving focus on the imponderable things in life, things she helped students to understand and confront through the words of Shakespeare, who was to her more a spirit guide than a writer––a savior, a light for seeing the untidiest corners of human existence. She brought people from different languages and cultural traditions, and from their own demons, into sharp focus as speakers of Shakespeare’s gospel.

For the better part of a year, she coached Japanese baritone Takaoki Onishi’s (Graduate Diploma ’13, voice; Artist Diploma ’15, opera studies) Hamlet monologue to performances of such clarity and originality that all my actor friends were in awe––of Taka’s power as actor, but also as speaker of complex, associative soul-bearing in a language fairly new to him. Eve had taken his hand and walked to the center of that play and shown him around. “Confound the ignorant, and amaze indeed/the very faculty of eyes and ears ... ” She helped him find the emotional logic there, experimented with melody and meaning, and set him free in it. It is hard to convey how moving this was to all of us. It was something only this great pedagogue could have done, it was pure Eve: soulful, deeply aware of life’s ironies and caprice, keenly observant of the person in front of her, and generous beyond generous. And it happened with many of her students, regardless of their native tongue.

Needless to say, Eve also carried Chekhov in her bones. But, within minutes of meeting her, I found she could quote chunks of Shaw, Gilbert and Sullivan, and Noël Coward with equal perception and unabashed glee. My times with her, in hallways between classes, or awaiting students in the office, were usually clamorous with declamation (Lear! Lady Bracknell!) and mirth. These are lovely, irreplaceable memories.

Eve was a tiny Titan, radiant and fiercely loyal to friends and to language, which bore her bobbing and reaching through life.

Stephen Wadsworth is the James S. Marcus Faculty Fellow and the director of the Artist Diploma in Opera Studies program

>Do you have a favorite memory of Eve Shapiro? Let us know at [email protected].