Marking the Centenary of Women's Suffrage in the United States

NEW YORK –– Juilliard announces the 36th annual Focus festival, Trailblazers: Pioneering Women Composers of the 20th Century, co-curated by Odaline de la Martinez, a Cuban-American conductor and composer based in London, and Focus director and conductor Joel Sachs, taking place from Friday, January 24, through Friday, January 31, 2020. Juilliard’s Focus festival each year offers a survey of a topic in contemporary music. This year’s festival marks the centenary of women’s suffrage in the United States, with the 19th amendment first giving women the vote in 1920. Director Joel Sachs writes that the festival “celebrates a group of women, most of whom came of age in the early 20th century, filled with determination to establish themselves as professional composers. Their struggle was admirable, setting the stage for subsequent generations of women composers, whose numbers and acceptance have grown enormously.”

Co-curator Odaline de la Martinez said, “It’s so important that this festival is happening. We’re making a point—for the students and for the public—about standing up for women composers and recognizing women who fought hard for what we have today.”

The festival will explore the work of several American composers, among them, Ruth Crawford Seeger (1901-53). Seeger, who was well-known for her interest in American folk music, was also a modernist. Germaine Tailleferre (1892-1983), the only woman who was a member of Les Six, will be represented by her Sonata for Harp on January 29. Chinese composer Liu Zhuang’s (1932-2011) Wind Through Pine, for flute, prepared piano, and cello, will be performed on January 27, along with String Quartet No. 3 by Elizabeth Maconchy (1907-94), another prominent composer whose work is not often performed. American composer Margaret Bonds (1913-72) studied with Roy Harris, who was on the Juilliard faculty, and she also was enrolled in Juilliard’s Extension Division, where she studied with Robert Starer (faculty 1949-70). Some of Bonds’ manuscripts are housed in Juilliard’s manuscript collection. Bonds, whose Dream Portraits will be performed on January 30, studied with Florence Price (1887-1953), the first African American woman to have a symphony performed by a major U.S. orchestra, the Chicago Symphony. Price’s Piano Sonata will be performed on January 28. Composer Lili Boulanger’s (1893-1918) Nocturne and Cortège for violin and piano will be performed on January 30, and South African composer Priaulx Rainier (1903-86) who studied with Lili’s sister, Nadia Boulanger, will have two pieces performed during the chamber music week: Ubunzima and Dance of the Rain on January 28. Korean composer Young-ja Lee’s (b. 1931) daughter, June Han (DMA ’04, harp), will be a panelist on the January 28 pre-concert discussion, along with Odaline de la Martinez, Thea Musgrave, and Joel Sachs. Young-ja Lee’s Le Pélerinage de l’Âme will be featured on the concert that follows that evening.

All concerts are free, and tickets are available at juilliard.edu/calendar. Read more about this year's festival in the Juilliard Journal.

The Juilliard Orchestra performs the closing-night concert on Friday, January 31, 2020, at 7:30pm in Alice Tully Hall. The concert will be led by conductor David Robertson, director of Juilliard’s conducting studies and distinguished visiting faculty, along with student conductors Kyle Ritenauer, Sasha Scolnik-Brower, and Molly Turner. Anne Manson, who was originally scheduled to conduct this concert had to withdraw due to a minor health issue. The program features A Little Summer Suite (2015) by Betsy Jolas (France, b. 1926); Cello Concerto No. 2 with Juilliard cellist Samuel DeCaprio by Grażyna Bacewicz (Poland, 1909-69); “On the Cliffs of Cornwall” (prelude to Act II of The Wreckers) (1904) by Ethel Smyth (U.K., 1858-1944); Rainbow (1990) by Thea Musgrave (Scotland/U.S., b. 1928); and The Rider on the White Horse (2002) by Sofia Gubaidulina (USSR/Germany, b. 1931) with Juilliard organist Raphael Vogl. David Robertson is appearing courtesy of the Metropolitan Opera, where he is conducting Porgy and Bess.

A complete listing of the programs follows at the end of this press release.

About the New Juilliard Ensemble
The New Juilliard Ensemble, led by founding director Joel Sachs and in its 27th season, presents music by a variety of international composers who write in diverse styles. The ensemble appears regularly at the Museum of Modern Art’s (MoMA) Summergarden series, has been featured four times at the Lincoln Center Festival, and has premiered some 100 compositions. The season’s concluding N.J.E. concert on April 13, in Alice Tully Hall, will have five world premieres of music composed for N.J.E. by Juilliard composition students Evan Anderson and Marc Migo Cortes, Chinese composers Ye Xiaogang and Yao Chen, and Mexican/German composer-singer Diana Syrse, who will be the soloist for her piece.

The New Juilliard Ensemble performs the opening concert of Juilliard’s annual Focus festival; recent editions have included: On the Air!: A Salute to 75 Years of International Radio Commissioning (2019), China Today: A Festival of Chinese Composition (2018); Our Southern Neighbors: The Music of Latin America (2017); Milton Babbitt’s World: A Centennial Celebration (2016); and Nippon Gendai Ongaku: Japanese Music Since 1945 (2015).

About Joel Sachs
Joel Sachs, founding director and conductor of the New Juilliard Ensemble, performs a vast range of traditional and contemporary music as a conductor and pianist. As co-director of the internationally acclaimed new music ensemble Continuum, he has appeared in hundreds of performances in New York, nationally, and throughout Europe, Asia, and Latin America. He has also conducted orchestras and ensembles in Austria, Brazil, Canada, China, El Salvador, Germany, Hungary, Iceland, Mexico, Switzerland, and Ukraine, has held new music residencies in Berlin, Shanghai, London, Salzburg, Curitiba (Brazil), Newcastle Upon Tyne (U.K.), Helsinki, and the Banff Centre (Canada), and has given recitals of post-traditional piano music worldwide.

One of the most active presenters of new music in New York, Sachs founded the New Juilliard Ensemble in 1993. He produces and directs Juilliard’s annual Focus festival, and he has been the artistic director of Juilliard’s Summergarden concerts at MoMA since 1993.

About Odaline de la Martinez
Cuban-American composer and conductor Odaline de la Martinez pursues a busy career composing (particularly opera), conducting repertoire spanning from Mozart symphonies to the latest music, and recording. As a child, her parents sent her and her sister to the U.S. to live with family in Tucson, Arizona, following the Bay of Pigs invasion. Their parents arrived several years later, and the family relocated to New Orleans. Upon graduation from Tulane University, Martinez was awarded several scholarships that took her to the U.K. for further work at the Royal Academy of Music (RAM) and University of Surrey. In 1976, while studying at RAM, she cofounded the ensemble Lontano and began recording for the BBC and touring. As her career flourished, she remained in London. At 34, Martinez was the first woman to conduct a BBC Proms Concert at Royal Albert Hall.

Numerous awards include a Marshall Scholarship from the British government, Guggenheim Fellowship, and Villa Lobos Medal from the Brazilian government. In 2017 she received a lifetime achievement award and, in 2019, an honorary doctorate from the University of Surrey and a gold badge from the Ivors Academy of Composers and Song Writers. Her operatic trilogy Imoinda—A Story of Love and Slavery received its world premiere in 2019 at the seventh London Festival of American Music. Martinez is in demand throughout the world as an orchestra and opera conductor. She has recorded more than 40 CDs for the record label Lorelt, which she founded in 1992, and for Summit, BMI, and Albany Records in the U.S., Chandos, Metier, Retrospect, and Conifer Classics in the U.K., and DaCapo in Denmark. As a musician she has earned a reputation for her versatile and eclectic vision as well as her ability to work with others to make that vision a reality.

About David Robertson
David Robertson is a highly sought-after podium figure in the worlds of opera, orchestral music, and new music. Building upon his association with the Metropolitan Opera, Robertson conducts the Met’s 2019-20 production of The Gershwins’ Porgy and Bess, directed by James Robinson, and featuring Eric Owens and Angel Blue. Robertson also returned to the Sydney Symphony Orchestra to complete his 2019 valedictory season as chief conductor and artistic director, and he will continue to conduct the Sydney Symphony Orchestra in future seasons as the city undertakes a major renovation of its Sydney Opera House. Robertson also recently completed a 13-year tenure as music director of the St. Louis Symphony Orchestra. He has served as artistic leader to many musical institutions, including the Orchestre National de Lyon, and—as a protégé of Pierre Boulez—Ensemble Intercontemporain. With frequent projects at the world’s leading opera houses, including the Met Opera, La Scala, Théâtre du Châtelet, and San Francisco Opera, he is also a frequent guest with the leading orchestras of the world: New York, Los Angeles, Boston, Chicago, Philadelphia, Cleveland, Amsterdam, Berlin, Beijing, and the BBC Symphony Orchestra, where he served as principal guest conductor.

In fall 2019, David Robertson joined the newly formed Tianjin Juilliard Advisory Council, an international body created to guide the Chinese campus of Juilliard, complementing his role as director of conducting studies, distinguished visiting faculty. In the 2019-20 season, Robertson continues his collaboration with composer John Adams, conducting performances of his opera-oratorio El Niño with the Houston Symphony. He returns to the Staatskapelle Dreden and Czech Philharmonic, and conducts the Netherlands Radio Philharmonic Orchestra, the New Japan Philharmonic, and, in New York, the Juilliard Orchestra at Carnegie Hall (Feb. 25). Robertson has received numerous awards and in 2011 was named a Chevalier de l’Ordre des Arts et des Lettres by the government of France.

All concerts are free, and tickets are available at juilliard.edu/calendar. 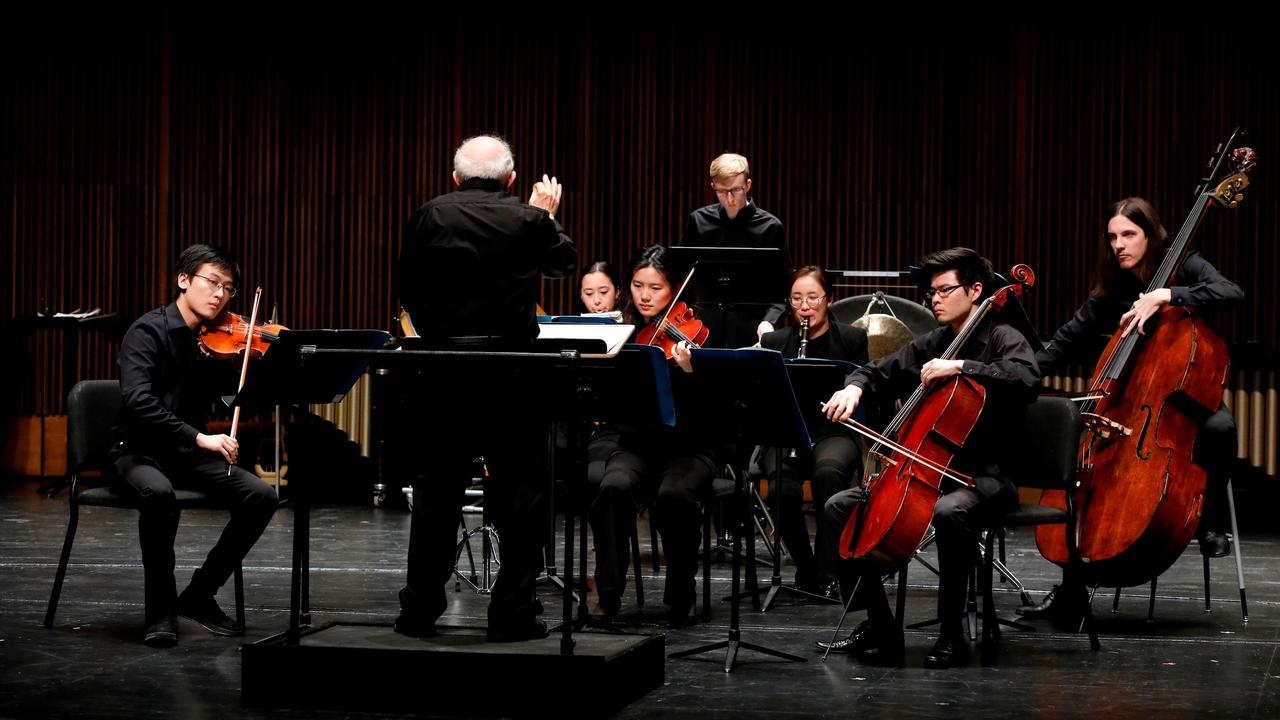