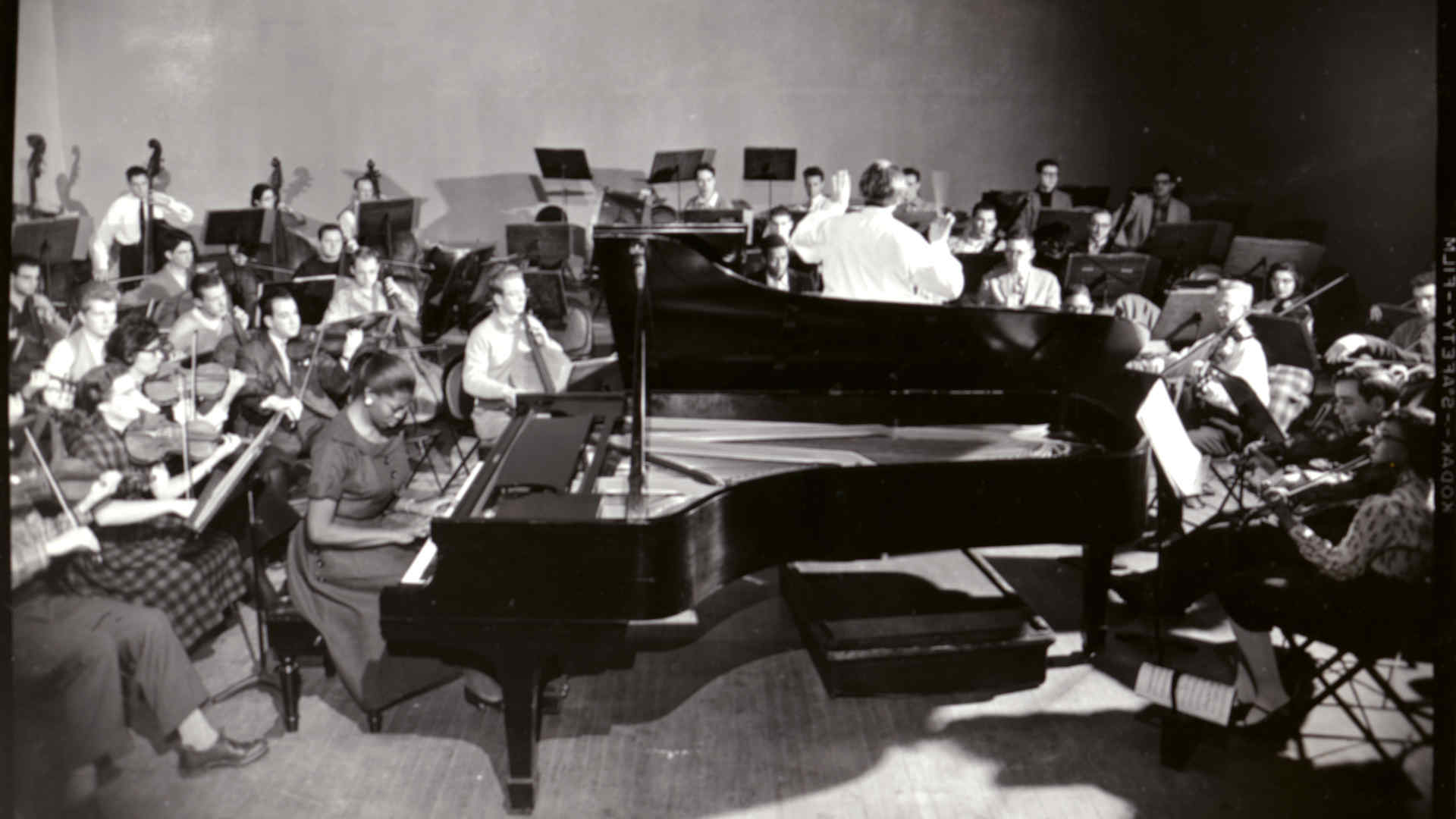 Looking back on Juilliard days

In advance of the music alumni reunion, which was to have happened this spring and which will be rescheduled when circumstances permit, the alumni office asked alums to send in reminiscences and photos. We’ve included excerpts from some of them here—many thanks to all who replied. It was great to see the mix of memories from both the old Juilliard building, on Claremont Avenue in upper Manhattan, and the Lincoln Center campus.

Send us your reminiscence at [email protected].

Julie Jaffee Nagel (BM ’65, MS ’66, piano)
While I was still at Juilliard, I could never have predicted how my life and career would turn out. But my education set the tone for me to think, feel, analyze, and gradually find a creative way to blend music with my subsequent degrees and work in psychology and social work and a full training in psychoanalysis.

Doctoral candidate Ivan Enrique Rodriguez (MM ’19, composition)
I’ve absolutely loved every second of my time at Juilliard. It’s a unique place, and getting in the school is a huge achievement on its own—it’s like climbing a very tall mountain. But once you get to the summit, you see that you’re surrounded by uniquely talented people. Understanding that you belong to that family changes your journey’s perspective from competing against others to blossoming with them!

Marilyn Hochberg Hammerman (BS ’59, piano)
One day as I exited the elevator in my last year, a student in flute faculty member Julie [Julius] Baker’s wind ensemble class asked, frantically, for a pianist. I volunteered and followed him to the classroom. After adjusting the bench, I looked at the score. It was handwritten and had at least two dozen sixteenth notes in the first measure. I can’t remember the tempo but after numerous attempts to read and play, Mr. Baker asked me, “Are you sure you’re a pianist?”

Gary De Sesa (BS ’73, MM ’74, piano)
It was February 11, 1971, the first day of the second semester. I had been awarded a teaching fellowship as accompanist of the Juilliard Chorus. As I walked into rehearsal, I saw a new soprano—the most beautiful woman I had ever seen or imagined. Her name was Kita Bouroff. An exchange of smiles became an exchange of contact information, which became an exchange of dating, which became an exchange of rings and vows. Five years later, we gave birth to our son, who went on to the Juilliard Pre-College, where we saw him rehearse as concertmaster of the orchestra in the same room in which his parents first laid eyes on each other. In July we had our 44th wedding anniversary. Thanks, Juilliard!

Peter Ludwig (BS ’68, voice)
The Recital Hall at 120 Claremont was packed full of 17- and 18-year-old students who would rather have been elsewhere, practicing. Our instructor, Joseph Braunstein (faculty 1964–65) was an elderly, distinguished gentleman, with a store of knowledge spanning the entirety of music history. Unfortunately, his thick Viennese accent repeatedly occasioned peals of laughter from the students, which upset the dear man, and he would send for Dean [Gordon] Hardy (BS ’52, piano; faculty 1954–74), who would come into the hall and attempt to tone things down. Da capo, ad infinitum.

Jeffrey Biegel (BM ’83, MM ’84, piano)
Adele Marcus (faculty 1954–91) was a most pivotal teacher who transcended traditions from the great pianist, Josef Lhévinne (faculty 1924–44)—who taught at Juilliard with his wife, Rosina (faculty 1925-76). You always knew the Marcus student on the world stage because there was a special way she taught about sound. She taught with reverence for the past but had a keen eye on new music.

Christine Spencer (’52, voice)
My fondest memories are those I shared with my best friend, Gloria Davy (BS ’53, voice), and my voice teacher, Belle Julie Soudant (Diploma 1913, voice; Diploma 1917, music education; Diploma 1917, piano; faculty 1921–69). When I attended Juilliard, it was located uptown, and climbing that hill every day was an exercise in itself.

David Arend (MM ’97, double bass)
A favorite Juilliard story was when we were performing The Dream Project involving many music, dance, and drama students. I had to scurry off stage left back behind the set—with my double bass—and then on stage right for the next piece. As I approached, I noticed my music wasn’t where I left it! The show must go on, so I entered. The trombonist whispered, “Where’s your music?” I didn’t know, so played the five-minute part from memory. As I walked offstage, a friend waved my part and said, “I found it!” Too late, but it all worked out.

Lyon Leifer (BS ’64, flute)
Walking down the corridor in the building on Claremont, I encountered the usual Friday jam session. People were standing around in the corridor, and somebody said, “Let’s see what he can do.” I said I didn’t play jazz. They wouldn’t let me off, basically dragging me inside with my flute. I let myself get on the stand and tried to play something. I was kicked out of there as fast as I’d been dragged in. Thanks largely to Juilliard, I have to be in an opera pit, where I do know what I’m doing!

Naomi Sugino Takagi (BM ’88, MM ’90, piano)
Here is the only picture that I have of me with Beveridge Webster (faculty 1946–90), which was taken in his studio at Juilliard around 1987. I remember that we not only had lessons at school, but during the summer, he often invited me to his Scarsdale home for lessons and Mrs. Webster would provide a nice lunch for us!

Stephen Dankner (DMA ’71, composition)
My favorite academic course was Modern World Drama, taught by Elizabeth Stambler (faculty 1947–72). We read and studied/analyzed plays by Beckett, de Ghelderode, Pirandello, and other great modern playwrights. Thanks to her, I fell in love with Waiting for Godot. Her teaching was remarkable, and I’ve never forgotten her love of these plays, which she passed on to us. 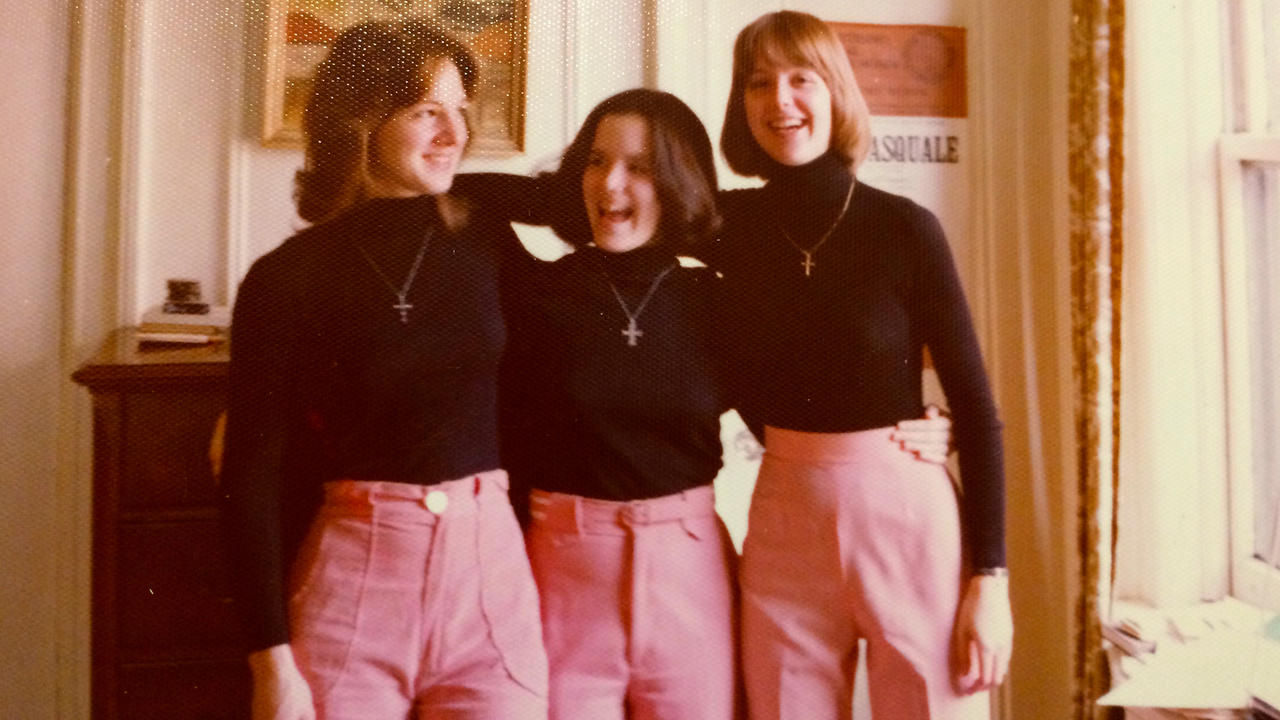 Bärli Nugent (BM ’76, MM ’77, flute), assistant dean and the director of chamber music, sent two photos, which appear above and below. “My Juilliard roommates and I in our Olcott Hotel apartment on West 72nd Street—Sharon Smith Polifrone (BM ’77, MM ’78, violin) and Susan Branscom Taylor (’76, violin). We decided to be goofy one day and dress up identically!” The picture below “dates from 1952, when my mother, Irene Maria Scheidmann (’52, piano), was studying at Juilliard with Rosina Lhévinne (faculty 1925–76). My parents were engaged, and one day, on a walk with Madame Lhévinne, they persuaded her to hop on this swing and my dad took this photo of her and my mom.” 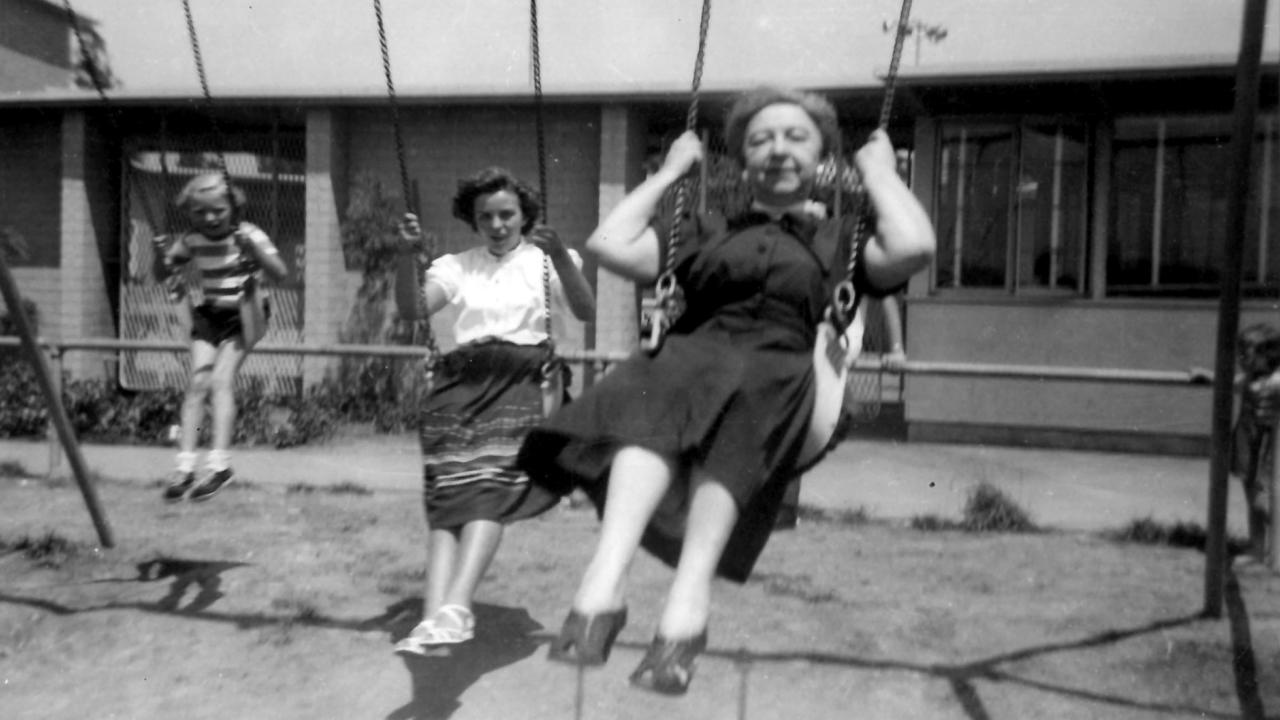 Noel Tipton (BS ’56, MS ’57, piano)
In 1958, we were having morning coffee. Van Cliburn (Diploma ’54, piano) was among us. Van looked at his watch, jumped up and said “See y’all later, gotta catch a plane to Moscow” (for the Tchaikovsky Piano Competition). We all smiled and shared our common opinion that Van was about to get his comeuppance. At that time all musical things Russian seemed unbeatable. As the world knows, Van won and we had our collective comeuppance. Having known Van from our pre-college days near Shreveport, Louisiana, I was thrilled when he won and, to this day, revel in that moment. 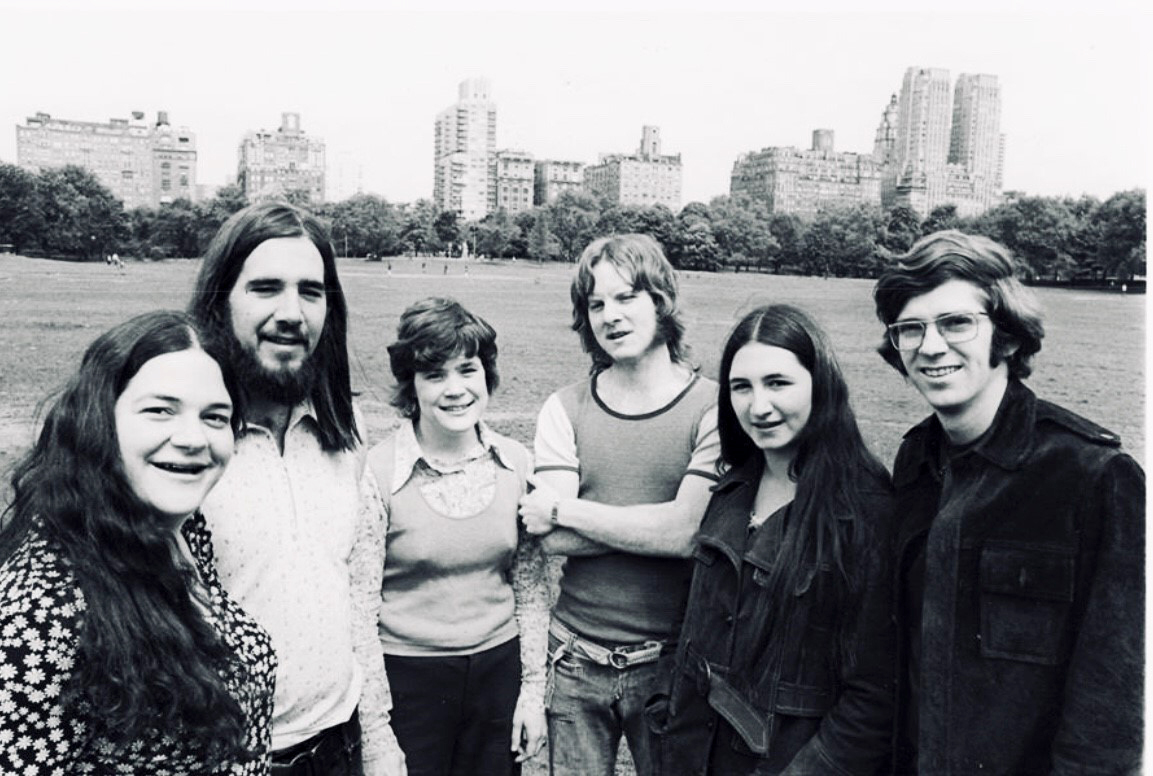 Kelly Ricks (BM ’02, trumpet)
I was sitting in a music history class when the news came in about planes hitting the World Trade Center. Everything was in chaos. Cell phone calls wouldn’t go through. No one knew where to go or what to do. There were words being spoken in anger and in fear. One friend vowed to immediately enlist in the armed forces. Students were ushered into Paul Hall—a kind of underground shelter. I don’t remember how long we were kept there. Afterward, I gravitated toward a group of friends. One of them, Isabel Leonard (BM ’04, MM ’06, voice), had grown up not too far from school, so our little circle piled into cabs and headed uptown to her parents’ house, where her mother prepared a magnificent spread for us—including the best pesto I’ve ever tasted. Someone put on Disney’s The Little Mermaid, we sat together, ate, and took haven on that dark day in one another’s friendship.

Robert Smith (MS ’68, piano)
Alton Jones (faculty 1921–71) was such a mensch to his students. Every two weeks I would meet him at the Riverside Church cafeteria, which was across from the Claremont Ave. building. One of my career highlights would be getting to know (as one of his 5,000 closest friends!) Van Cliburn during the 15 or so years he resided in Fort Worth. Never mind the fame and true Russian- spirited playing. He was also a delight.