Concert for Equality: A Front-Yard Story 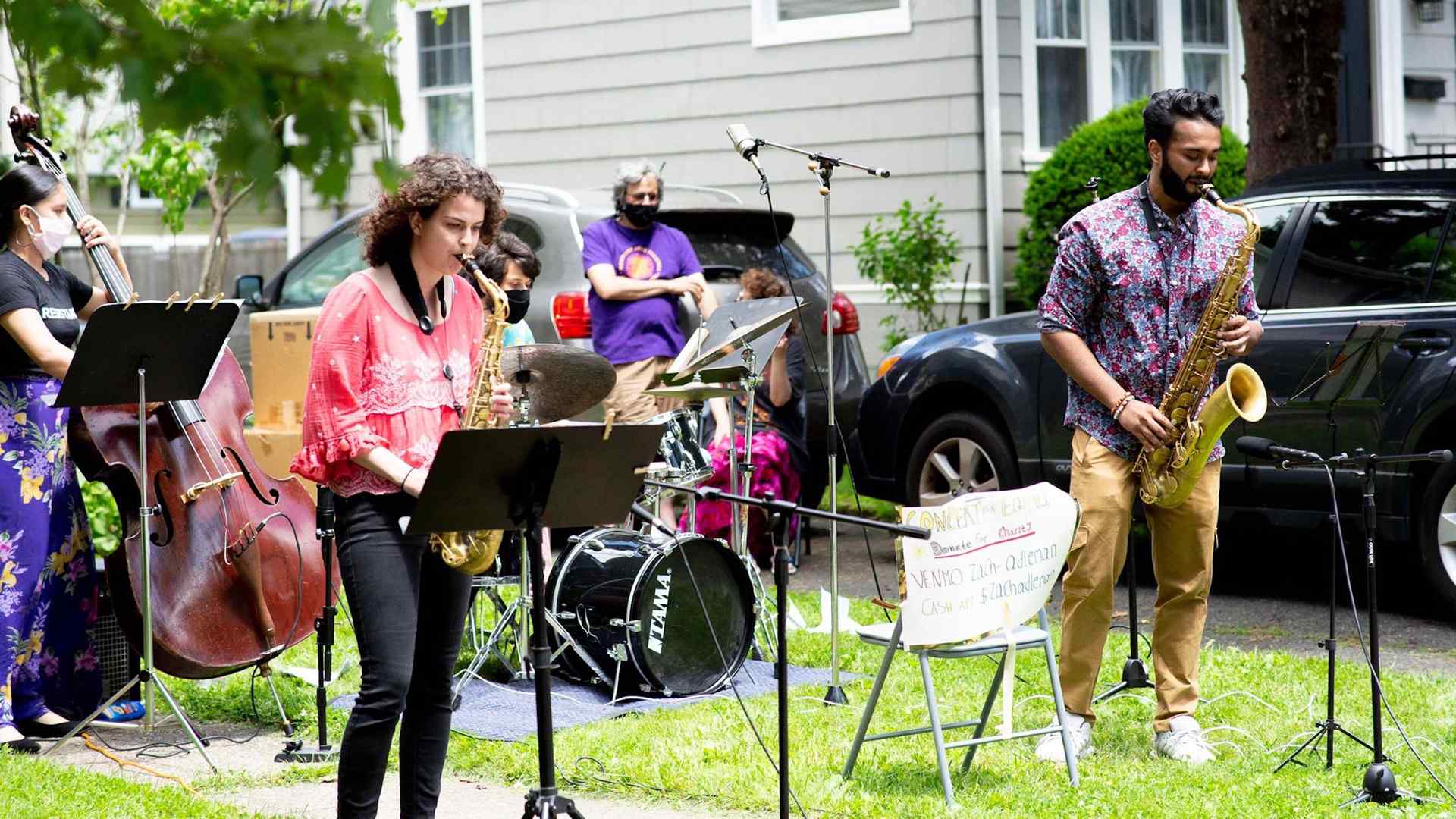 Jazz drum student Zach Adleman writes about performing, for the first time in months, in a concert he created, in response to the murder of George Floyd.

By Zach Adleman
As I planned a Concert for Equality, a streamed jazz performance from my family’s front yard in Montclair, New Jersey, I wondered what it would be like to play live music again.

Instead of performing in venues or jazz clubs, I would be playing for kids and for families in my neighborhood, creating closer bonds with those around me. Unfortunately, what inspired this concert was a time stamp that will be burned in the American psyche for decades: 8 minutes and 46 seconds.

After George Floyd was killed, I grieved. I watched my friends and mentors grieve. The chaos that ensued, characterized by fire, police aggression, and tear gas, represented issues that people of color have been facing for years and now were bubbling to the surface of everyone’s collective consciousness. Thus I created A Concert for Equality.

First, I assembled the band, which included two of my classmates—master’s student Birsa Chatterjee on tenor saxophone and recent grad Zoe Obadia on alto sax—as well as my friends Caelan Cardello on piano, and Liany Mateo on bass. Then, I wanted to pick a date so I could give this concert the time and planning it deserved while still capitalizing on the momentum picking up nationally. In the end, I gave myself one week.

I began to formulate the poster; strategize how to stream to Facebook, Instagram, and Zoom simultaneously; and send emails to spread the word and promote the concert. I reached out to Juilliard, Jazz at Lincoln Center, Jazz House Kids, Michigan State, and other organizations that I’d been a part of over the years. Then, there was the ground game: I enlisted my parents to invite the neighbors and other friends in the area as well as relatives across the U.S., many of whom I don’t get a chance to see often.

Throughout the pandemic, I found myself asking, “What does the America I want to see look like?” When debating social issues or politics, I was so entrenched in thoughts like “this won’t work, or there is a problem with that idea.” I found that I couldn’t rattle off solutions as easily as I could rattle off problems. Now, instead of debating social issues with retorts, I’ve begun my journey into actively being involved in solutions.

In thinking about these fundamental questions about America, I began looking for organizations that would make the change I wanted to see. These included the Know Your Rights Camp COVID-19 Relief Fund, which provides basic necessities to Black and Brown people disproportionately hurt by the pandemic, and Campaign Zero, which seeks to develop policy changes and voting strategies to empower Black and Brown people.

Playing a concert for the first time after 12 weeks felt incredible and powerful. We played for more than an hour, which honestly flew by. One highlight was the premiere of a piece inspired by Black women in literature that bassist Liany Mateo had composed for her (canceled) senior recital at Michigan State. Before, during, and after the concert, I received donations and messages from family members, old friends, neighbors, and little kids. We are proud to announce that we raised more than $2,400. Producing this concert was truly a community affair.